Benito Mussolini was the Fascist dictator of Italy from 1922 until 1943; as part of the Axis alliance, he led his country into war against France and Britain in 1940, and against the United States in 1941. He was deposed in 1943 but his close ally, Adolf Hitler, rescued him from prison. Mussolini then became head of a Nazi-controlled puppet state until he was killed by Communist partisans in 1945 while trying to flee.

Benito Mussolini was born in Varano dei Costa, near the village of Dovia di Predappio in the Romagna region. He was the eldest son of Alessandro, a blacksmith with strong socialist convictions and of Rosa Maltoni, an elementary school teacher and devout catholic. He was given the name "Benito" in honour of the Mexican national hero Benito Juárez.

Benito attended the Salesian school of Faenza, but was expelled after two years for attacking a student with a knife. He continued his studies at lay schools. In 1901, Benito he obtained an elementary school teacher certificate.

During World War I he founded the Fasci di Combattimento [1] who opposed socialism and communism in Italy and used violence to attack them despite originally being a socialist. He found that his violent tactics were unpopular with the electorate and therefore changed them to increase support after winning no seats in the 1919 election. The economic climate and social unrest at the time became the platform from which Mussolini would build his success. Governments came and went in politically unstable postwar Italy and Mussolini posed as the champion of law and order. He won 35 seats in the 1921 election. He was opposed to the general strike called on by the socialists and communists in August 1922. He intimated to the monarchy and papacy that he supported them both. In October 1922 he presented an ultimatum, Either we are allowed govern or we’ll seize power by marching on Rome [2] The Italian prime minister resigned and the King invited Mussolini to take his place.

He and the party had won only 35 seats out of 535 in the parliament. He had four ministerial positions in government yet immediately set about establishing a totalitarian dictatorship. Propaganda was important here – he assumed control of the radio, press, and cinema. Under the newly introduced Acerbo law, the party that won most votes in the election would have a two-thirds majority of seats in parliament. Although undemocratic in nature, many Italians supported this as they were tired of the political instability which had grabbed their country. Mussolini ensured that he would win the next election and form a two-thirds majority government.

On May 30th 1924, Giacomo Matteotti made a passionate speech in Rome condemning Mussolini's leadership of Italy. He declared that the 1924 election was a fraud and that the Fascists had won it using violence and a system corrupted by the Acerbo Law. Matteotti was the leader of the socialists and was killed by the fascists. The socialists walked out of parliament in protest as a result and this gave Mussolini a free hand in parliament. In January 1925 Mussolini assumed responsibility for his new direction of policy. "Gentlemen, Italy wants peace tranquillity, calm in which to work We shall give her this... by means of love if possible but by force if necessary..." [3] After this speech, all political parties other than the fascists and their newspapers were suppressed. The fascist party became the only legitimate party in the state, the cult of Mussolini was promoted and he became Il Duce. In January 1926 Mussolini was given the power to rule by decree, a power he used several hundred times. In 1927 he established the OVRA, a secret policy force that was used regularly against his opponents.

The corporate state was established to give fascists control over their economy [4]. Trade Unions were abolished and corporations representing employers and workers were established. Strikes and lockouts were forbidden. Government dictated wages, prices and work conditions. With the stability that followed foreign investment was encouraged, government spending was reduced and the Italian taxation system was simplified. By the end of the 20’s however the early economic successes began to change. Unemployment rose, the value of the Lira fell and the Italian economy also began to feel the effects of the Wall Street crash. To stimulate the economy and provide employment Mussolini ordered the building of the autostrade (motorways) and the draining of marshland (Like the Pontin Marsh near Rome). He promoted the Battle for Grain in an effort to make Italy self-sufficient and used the cult of Mussolini as a means of promoting himself and fascist success’s. Slogans like, The leader is always right [5] were commonplace.

Mussolini stilled craved the respectability of being a statesman. His agreement with Pope Pius XI was giving him this perceived respectability. The signing of the Lateran treaty and Concordat settled a fifty-year dispute between the Italian government and the Vatican. The Vatican recognized the Italian state and vice versa. The Vatican was given compensation for the taking of Rome in 1870 and the Catholic Church was recognized as the sole religion of Italy.

Mussolini won some foreign policy successes. He appointed his son-in-law Ciano as foreign minister. Mussolini therefore took a deep interest in foreign policy and spent a great deal of time over this. Early successes such as securing the city of Fiume for Italy and getting compensation from Greece for the death of an Italian soldier in a border incident reflected positively on Mussolini. Although he used phrases like, A Minute on the battlefield is worth a lifetime of peace [6] or it is better to live one day as a lion than a lifetime as a lamb [7] Mussolini still wanted to be seen as a man of peace. In 1925 he signed the Lacarno pact, which recognized Germany’s borders. In September 1928 he signed the Kellog-Briand pact, which renounced war as an instrument of national policy. He opposed German union with Austria and moved troops to the border when Hitler first proposed Anschluss. By 1935 Mussolini had moved past this position and wished to expand Italy’s borders. He attacked and struggled to defeat Abyssinia in October 1935. Hitler’s non-intervention and general support of the Italians actions brought the two leaders closer together. When the Spanish civil war broke out in 1936 Hitler and Mussolini jointly aided Franco. In 1937-1938 there were 70,000 troops fighting in Spain as well as a huge number of arms in the hands of Franco’s army. The Rome Berlin axis 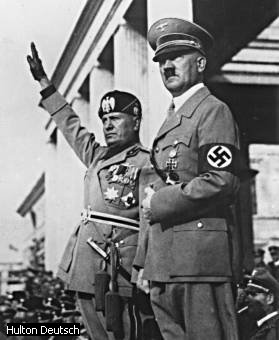 Mussolini and Hitler standing side by side.

was signed in 1936. At this time Italian newspapers were ordered to be pro-German. The bond between the two countries was strengthened as a result of Italian neutrality of Anschluss between Germany and Austria in 1936 and Mussolini’s role as a peacemaker at the Munich conference. By March 1939 the axis had become a pact of steel with both countries promising mutual support in case of a war and in effect giving Hitler a free hand in Poland, seeing World War II break out on September 1939.

At this time Italy was economically and militarily exhausted as a result of the wars in Africa and Spain. Mussolini was forced to break the pact of steel and declared Italy a non-combatant. Afraid of a German invasion, Mussolini orders the buildings of huge fortifications along its northern border. With the war going favorably for Germany by March 1940, Hitler met Mussolini at the Brenner pass and he convinced Mussolini that total victory was certain and close at hand. Mussolini wanted a share of the spoils and in June 1940 announced that Italy had joined the war on the German side. He appointed himself as commander-in-chief and unqualified fascist politicians were put in senior military positions. Italy invaded France and North Africa where their campaign went poorly. Their poor performance required German support and their eventual defeat of North Africa saw the allies invade Italy via Sicily.

By 1943 Mussolini’s support had diminished. The King deposed him as leader in July 1943. The new Italian prime minister declared war on Germany. Southern Italy fell to the allies, Northern Italy remained under control and Mussolini was made leader of the so-called Salo republic, which what was in effect a German puppet state. Mussolini was eventually captured by Italian guerrillas and was hung upside down along with his mistress in a petrol station outside Milan. This brought about the downfall of Italian fascism and all it stood for.