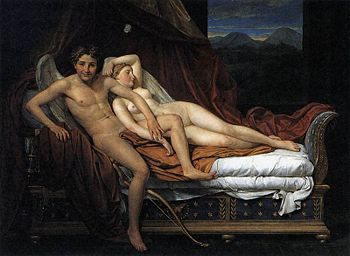 Love is a powerful emotion with many forms, including romantic love. French artist Jacques-Louis David painted Cupid and Psyche in 1817.

Love is a human emotion of strong affection "induced by that which delights or commands admiration"[1] which describes positive feelings for a person or thing or idea or concept. While the term varies considerably across cultures and history, it often means feelings of "warm attachment, enthusiasm, or devotion".[2] The state of being "in love" is marked by positive bonds of affection and is often characterized by admiration, feelings of a common interest, and benevolence. Between two humans, it can describe an urge to have sex.[2] There is an altruistic component to love in the sense of having an unselfish loyalty and concern for another,[2] and most religious experiences involve a kind of love for a deity, a concept or a charismatic figure. The word love also denotes a score in tennis of zero.[2] There are many songs titled "love", and much has been written about the subject, which is sometimes called the "international language."

Love is both a feeling of affection, brotherhood, good will, as well as an expression of strong liking. Sometimes it's the object of the attraction.[3] For example, a husband may address his wife by the term "love". Love also can describe sexual passion, romantic involvement, and it can also describe the physical act of sex, as in the phrase "make love".[3][1] It is synonymous with kindness and devotion, affection and attachment.[1] From the mythology of ancient Greece and ancient Rome, "love" can describe the god of love, sometimes thought of as Cupid or Venus, although Venus was more accurately described as the goddess of sexual passion or desire, and not love per se. In addition, in tennis, "love" is a score meaning that no points have been won yet.[1]

Both definitions list the sense of love as feelings between humans primarily, although there are many senses of the term. A person can feel a love for a thing, such as a "love of ice cream" or a "love of Paris." But the exact definition is difficult to pin down and varies considerably in different contexts and cultures.[4] Love can vary considerably from passionate romantic love to nonsexual or asexual closeness typical of families, or even as a form of intense friendship described as platonic love.[5] In addition, a person can fall in love with a religious idea or deity or charismatic figure, and the devotion felt has been described as love.[6] Love isn't hate. Love isn't apathy, but intense feeling. Love isn't merely lust, but a passionate caring for another. Love isn't merely friendship, but stronger. Love isn't like, but more intense. Rather, love is deep seated caring and feeling for another. It can be directed towards an ideal or cause or activity; for example, a teenager may love eating chocolate mixed with acai berries. 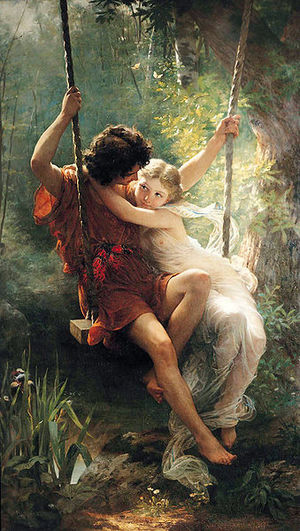 (PD) Photo of a painting: Pierre-Auguste Cot
This painting of 1873 by Pierre Auguste Cot is entitled "Spring", which is often the season associated with young love and romance.

'Romantic love' is a strong feeling of attachment towards a human being. It's "when the chemicals in your brain kick in and you feel an emotional high, exhilaration, passion, and elation when you and your lover are together."[7] It's often described as being "blind"[7] in the sense that people in love lose a sense of rationally appraising each other or their relationship, and it is easy for one or both people in a romantic relationship to become deceived. It's characterized by infatuation as well.[7] The notion of romantic love is thought to have originated in Europe during the Middle Ages,[8] in novels and in thought. 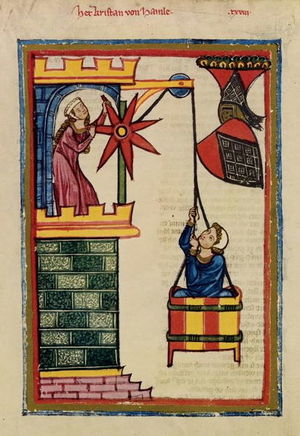 'Platonic love' is a strong friendship, generally not seen as passionate or marked by physical attraction, but rather a peaceful, serene, accepting kind of bond.[5] It's named after the Greek philosopher Plato. The term amor platonicus was coined during the 15th century by Florentine scholar Marsilio Ficino. Platonic love in this sense was derived from Plato's dialogue called the Symposium, which has as its topic the subject of love or Eros. Of particular importance there are the ideas attributed to the prophetess Diotima, which present love as a means of ascent to contemplation of the Divine. For Diotima, and for Plato generally, the most correct use of love of other human beings is to direct ones mind to love of Divinity. With genuine Platonic love, the beautiful or lovely other person inspires the mind and the soul and directs ones attention to spiritual things. According to Plato, Socrates claimed that the only thing he knew was "the art of love."[9] Platonic love is unmixed with "carnal desires" and which subsists between persons of the opposite sex but which involve the "mind only and its excellences".[10] One nineteenth century satirist in the Foolish Dictionary observed, in 1904, that Platonic love is...

Two Buddhist teachers practice platonic love. They promised to "never part" night or day, and they never separate for more than fifteen feet from each other.[11] If they both get on a plane, if they can't be seated near each other, they simply "do not get on" the plane.[11] If he wakes in the middle of the night, inspired by an idea, she too rises from her bed and follows him 100 yards down the road so he can work; their celibate partnership is a "high level of Buddhist practice that involves confronting their own imperfections and thereby learning to better serve the world."[11] According to New York Times reporter Ralph Blumenthal, the couple have renounced sex altogether.[11] 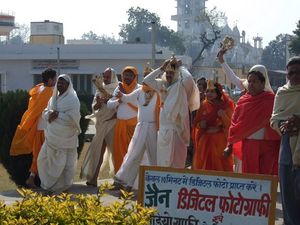 All religions to varying extents emphasize the importance and beauty of love, including these followers of the Jain religion.

'Religious love' is devotion to God.[6] Philosopher William James felt that "religious love is only man's natural emotion of love directed to a religious object."[12] Most religions have some connection to the concept of love; one Zen master challenges students with a "Buddhis-style tough love" which entails not being attached to things; Buddhism sees attachment as a cause of suffering.[11]

Love can be between close friends of the same sex, but in a nonsexual way, such as "bosom buddies". A phrase current in Western media today is bromance (brother + romance) which describes a non-sexual bond between males, although there is no indication that the phrase has enjoyed widespread usage. Soldiers in combat can become attached to each other, since their lives depend on each other. 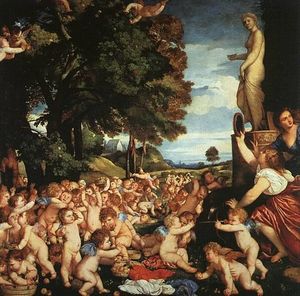 (PD) Photo of a painting: Titian
The Roman goddess Venus is often misunderstood today as the goddess of love, but she was more accurately the goddess of sexual desire and passion. Romans believed Venus had the power to make people fall in love instantly and abandon all rationality and sense.

The word has its roots in Middle English, and there are words related to it from Latin. 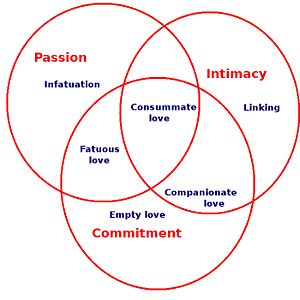 (PD) Diagram: Thomas Wright Sulcer
Psychologist Robert Sternberg suggested there were three basic components of love: passion, intimacy, and commitment, and when all three were present in a relationship, he described it as consummate love.

Biological theorists see love as a drive like hunger or thirst and sometimes see two major forces operating: sexual attraction and attachment (based on the same principles bonding infants to mothers.)

Scientists have identified a number of chemical hormones in the human body related to sex and mating: