This article is about Venus (mythology). For other uses of the term Venus, please see Venus (disambiguation). 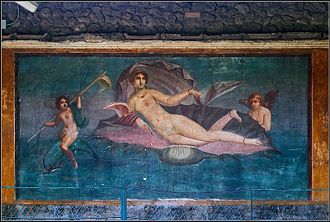 Aphrodite painted on a fresco uncovered at Pompeii.

Aphrodite (Greek) or Venus (Roman) is the goddess of sexual desire and beauty.[1][2] She is not the goddess of love or friendship. She had the power to cause people to swoon with desire and become instantly overcome with arousal, and there were instances when she unleashed this power on Zeus himself; the only beings she couldn't affect were three virgin goddesses, namely Hestia, Artemis, and Athena. It is a powerful but transitory emotion, quickly fading, and sexuality was seen as an "outside force", not an innate desire or hunger, but something imposed on people from outside us. Aphrodite is also seen as the goddess of laughter. In a sense, Aphrodite is a personification of the force of sexual desire, and it can be a powerful, impersonal force. Inappropriate desire can cause ruin and suffering and backfire in different ways.

There are differing accounts of the birth of Aphrodite. According to Greek poet Hesiod, she was born when the god Cronus, hiding with a scythe, cut off Ouranos' penis during the act of sexual intercourse, and threw the severed genitalia into the sea, and out of the sea foam -- aphros means sea foam -- Aphrodite was born. But a second account happens in the Iliad, in which she is described as the daughter of Zeus and the goddess Dione.

In Greek mythology, she is a beautiful woman who is always depicted in sculpture and painting and in epic poetry as being in the full flower of her beauty. Unlike Zeus or Hera, she is never depicted as a middle-aged person, but as youthful and attractive. There are no images of Aphrodite as a baby, toddler, child, or teenager; rather, she's depicted in her late teens or early twenties. 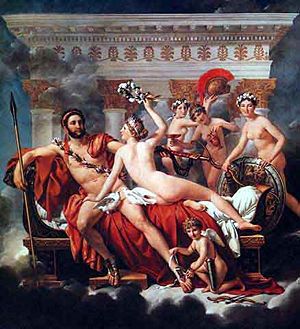 Generally gods and goddesses didn't interfere with each other's turf, but sometimes they came into conflict. In this painting by Jacques-Louis David, Aphrodite is influencing the god of war, Ares; she has an affair with him.

She has been described as vain, ill-tempered and easily offended. She was married to her husband Hephaestus, but she often had affairs despite her marriage. In the Iliad, she won a contest at the beginning of the story in which she bribed the human Paris to declare that Aphrodite was the most beautiful goddess, which angered the other two contestants including Athena and Hera, and set in motion the forces that caused the Trojan War. When Aphrodite gave Helen of Troy to Paris, despite Helen's marriage to the Greek king Menelaus, the ensuing abduction caused a political firestorm which led to a ten-year battle and the eventual destruction of Troy.

Aphrodite's beauty scared Zeus. He fretted that she would cause violence among the gods and goddesses; accordingly, Zeus married Aphrodite to Hephaestus, the ill-humored god of metalworking. Hephaestus was happy with his marital partner but she wasn't; she had romantic liaisons with Ares, Adonis and others.

In the Homeric hymn, Zeus is angry that Aphrodite interfered with his choice of sexual partners. Generally gods and goddesses have separate spheres of authority and are expected to stay inside the bounds of their own places of authority; but Aphrodite trespassed these bounds when she caused Zeus to have an affair. So, to teach her a lesson, Zeus overpowers Aphrodite and causes her to fall in love with a mortal, and this was, for her, a punishment of sorts from the most powerful god on Mount Olympus. So Aphrodite had sex with a human named Anchises. Normally a human, particularly a male, who has sex with a goddess can expect all kinds of negative fallout from such an encounter, but Anchises was careful to remember his status as a human. He realized that his encounter was a general transgression against the proper roles of gods and humans, and accordingly, and wisely, he doesn't ask for special privileges or favors. When gods and humans breed, the offspring generally are exceptional humans, but not gods or goddesses, generally. Since Aphrodite is a female goddess and Anchises is a male human, there is a secondary transgression which violated the cultural codes of ancient Greece in the sense that a lesser being is dominating through the act of sexual intercourse a superior being. This was against the prevailing view during Greek culture at the time that men were naturally dominant, and women naturally dominated, so in this instance, the roles were reversed. In another instance of female-goddess male-human interaction, Aphrodite mated with the human Adonis, and because of the love-making, Adonis died. Generally encounters between male gods and female humans were less fraught with problems for humans since the natural order of domination was supposedly reinforced.

When gods and humans mate, a child always results. Aphrodite and Anchises created a son Aeneas. During the Aeneid, which describes the epic travails of Aeneas in his escape from Troy, Aphrodite intervenes periodically in the story to provide advice to Aeneas or to argue on his behalf in the councils on Mount Olympus, and to try to deflect the anger of Hera or Juno, the wife of Zeus who hated Trojans.

In Gustav Holst's suite "The Planets" Venus is characterised as bringer of peace.