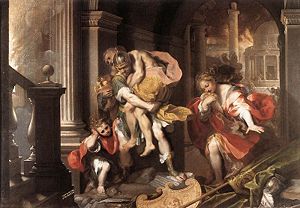 Anchises is carried by his strong son and part-god Aeneas out of the burning city of Troy.

Anchises is the father of the Roman hero Aeneas and a Trojan who has an affair with the goddess Venus or Aphrodite. According to mythology, Zeus was angry at Aphrodite for causing him to have sex; as a punishment to Aphrodite, Zeus caused her to have sexual relations with a human which, according to mythology, was beneath the dignity of a goddess. But Anchises was respectful. He realized he had no choice but to submit to the superior power of the goddess, but at the same time, he didn't ask for favors or immortality or any other special privileges, and as a result of his humility and knowing his status as a human, he avoided the fate of many other humans who had relations with gods and goddesses, which was usually death. However, a differing account says that Anchises made a mistake afterwards about bragging about his love affair with a goddess, and he was punished by Zeus with a bolt of lightning which made him unable to walk.

Anchises lived. But after the Trojan horse strategem by the wily Odysseus brought about the downfall of the city where he lived, Anchises wanted to stay on, but he was persuaded to listen to his son Aeneas when he saw a vision of a burning circle around his grandson Ascanius. Accordingly, he let his son Aeneas carry him out of the burning city of Troy which was sacked at the end of the Trojan War, and he survived this disaster although Aeneas' wife Creusa did not survive the escape from Troy. Anchises, according to the Aeneid by the Roman poet Virgil, dies on the island of Sicily, and while in the Underworld, is visited in the Elysian Fields by his living son Aeneas and is able to tell his son about the glory of the kingdom of Rome that Aeneas will found. In the Aeneid, Anchises represents the past, while Aeneas' son Ascanius represents the future, according to Classics scholar Elizabeth Vandiver.