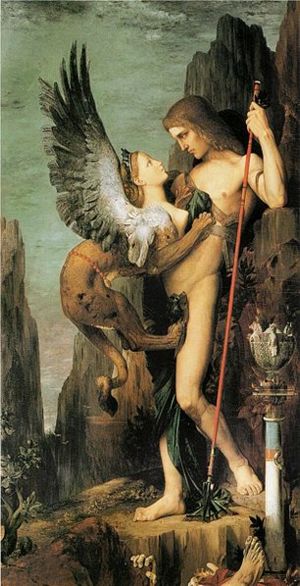 Oedipus was fated to kill his father and marry his mother, and ironically, actions done to try to avoid this fate ended up causing it to, indeed, happen. According to this logic, fate is unavoidable. Painting by Gustave Moreau entitled Oedipus and the Sphinx 1864.

Fate is a concept of the inevitability of the future. It is linked with the concept of time, and the idea of fate is that events on a time line follow a predetermined sequence based on unalterable cause-and-effect relations. What happened, had to happen; what will happen, will happen, and when events are said to have been fated to happen. The term is somewhat synonymous with destiny, although destiny is a more limited term which describes the process of fate, starting with the present, and working forward to the future. For example, it's one's destiny to die (since all humans will die). But fate, in contrast, can be thought of as pre-determined events in the past as well as the future; for example, one can say that it was fated to be here, right now, in this present moment, and mean that it was impossible for this moment to have happened any differently. In one sense, fate is the opposite of the concept of free will, which suggests that events are not pre-determined, but that humans can alter the future by acting.

The concept of fate has figured prominently in literature. In Oedipus Rex by Sophocles, the hero Oedipus was fated to kill his father and marry his mother; accordingly, various actions are taken by different characters in the story to try to avoid this pre-determined future, but as it turns out, these actions have the opposite effect of causing Oedipus, indeed, to kill his father and marry his mother. The idea of the play is that fate is unavoidable, but literary scholars have noticed the conundrum within the Greek tragedy, which is how the concepts of fate and free will are intertwined. Characters who exercise their free will to try to avoid their fate have the grave misfortune of causing the negative result that they're trying to avoid.

A story by W. Somerset Maugham in 1933 illustrates the idea of the unavoidability of fate:

The speaker is a character called Death in The Appointment in Samarra:

There was a merchant in Bagdad who sent his servant to market to buy provisions and in a little while the servant came back, white and trembling, and said, Master, just now when I was in the marketplace I was jostled by a woman in the crowd and when I turned I saw it was Death that jostled me. She looked at me and made a threatening gesture, now, lend me your horse, and I will ride away from this city and avoid my fate. I will go to Samarra and there Death will not find me. The merchant lent him his horse, and the servant mounted it, and he dug his spurs in its flanks and as fast as the horse could gallop he went. Then the merchant went down to the marketplace and he saw me standing in the crowd and he came to me and said, Why did you make a threating gesture to my servant when you saw him this morning? That was not a threatening gesture, I said, it was only a start of surprise. I was astonished to see him in Bagdad, for I had an appointment with him tonight in Samarra. -- The Appointment in Samarra 1933[1]