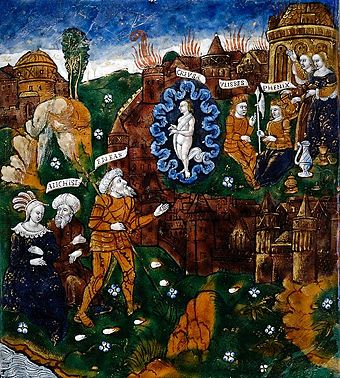 In this painting in the Louvre in Paris, Aeneas looks for his wife Creusa while they try to flee the destruction of the city of Troy, but Aeneas can only see her shade.

Creusa was the wife of Trojan hero Aeneas and daughter of Trojan King Priam. Creusa and Aeneas had a son named Ascanius who later went on with Aeneas to found a kingdom in Rome. Creusa is described by the Roman [poet Virgil in the epic story commissioned by Augustus Caesar called The Aeneid. In the story, during the sack of Troy by Greek warriors, Creusa flees the destruction and walks behind Aeneas, who carries his aging father Anchises and who holds the hand of his young son Ascanius. But Creusa is lost in the maelstrom of battle; when Aeneas goes back for her, he finds she is lost.