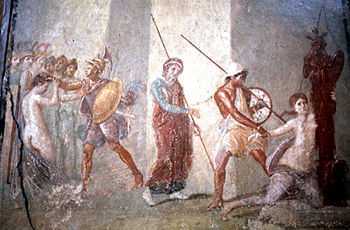 King Priam had to watch his daughter Cassandra dragged by Greek warrior Ajax during the Sack of Troy. Priam was killed soon thereafter. This wall painting was discovered at Pompeii.

King Priam is the leader of the Trojans during the Trojan War, according to Greek mythology based on epic poems by Homer including the Iliad and the Odyssey. He was the youngest son of Laomedon. He had different wives including Arisbe, Hecuba, and according to one account, fathered perhaps fifty sons and almost twenty daughters by his wives and concubines. Hector was his eldest son by Hecuba, and heir to the Trojan throne, but who was killed during the Trojan War; at one point in the Iliad, Priam journeys behind enemy lines to plea to Achilles for the return of Hector's dead body for a proper burial. Priam's other son Paris, was the cause of the Trojan War by abducting Helen of Troy from king Menelaus of Sparta and enraging the Greeks, including Menelaus' brother Agamemnon. Other children of Priam and Hecuba include the prophetic Helenus and Cassandra; eldest daughter Ilione; Deiphobus; Troilus; Polites; Creusa, wife of Aeneas; Laodice, wife of Helicaon; Polyxena, who was slaughtered on the grave of Achilles; and Polydorus, his youngest son.

Priam is killed during the Sack of Troy by Neoptolemus or Pyrrhus son of Achilles. His death is graphically related in Book II of the Aeneid by Virgil. In Virgil's description Neoptolemus first kills Priam's son Polites as he seeks sanctuary on the altar of Zeus. Priam rebukes Neoptolemus, throwing a spear at him, which misses. Neoptolemus then drags Priam to the altar and there kills him too. Greek savagery during the sack of Troy outrages the gods who make life difficult for many Greeks on their return home.