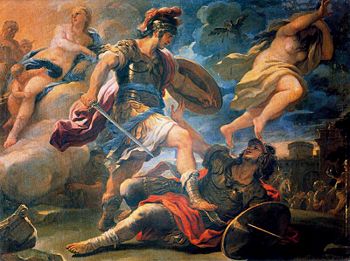 Turnus is a character and chief antagonist in Virgil's Aeneid. He competed with Aeneas for the hand of Lavinia in marriage. As a character, he's in sharp contrast to Aeneas, since he's proud, stubborn, unwilling to make compromises, and won't accept fate. Turnus wanted to marry princess Lavinia, daughter of King Latinus who was king of the Latins, despite an acceptance by Lavinia's father that she was supposed to marry an outsider, and King Latinus saw that outsider as Aeneas. Turnus' supporters included Latinus's wife queen Amata, his sister and river/fountain deity Juturna, the deposed king of the Etruscans named Mezentius, and the fierce warrior Queen Camilla of the Volsci.

Before Aeneas arrived in Italy, Turnus was the primary suitor. When Aeneas arrived, she was promised to Aeneas instead. Rather than agree to a single battle, Turnus allowed the Roman goddess Juno to follow through with her scheme to incite war between the Trojans and the Rotulians, and while King Latinus is displeased, he allows the war to happen. Turnus is brave but rash; at one point Turnus fights his way inside the Trojan camp when Aeneas is away, but fails to use common sense and open the gates to let his fellow soldiers in. If Turnus had seized this opportunity, then he would have won the war; instead, Turnus fights blindly, finds himself outnumbered, and jumps into the Tiber to escape. The war between the Latins and the Trojans includes Trojan allies such as King Evander and the Arcadians.

Turnus seals his fate by slaying Aeneas' friend prince Pallas, who is the son of Evander. He gloats over the killing and puts Pallas' sword-belt on. When news of the death of Pallas reaches Aeneas, Aeneas bursts with furor and rage and turns into a killing machine and is decribed by Virgil as a monster, and in this state, Aeneas would surely have killed Turnus, but he is led away from the scene of battle by a clever ruse by Turnus' supporter Juno. Juno conjures an image of Aeneas running toward the ship, and Turnus follows the image and boards the ship, and Juno cuts the cable, letting the ship drift freely, and keeping Turnus away from Aeneas. But the hot-headed Turnus is offended by Juno's action, and questions his value and thinks about killing himself and committing suicide; but he doesn't.

Finally, there is agreement that after the suffering, and that the only two persons with a real quarrel are Aeneas and Turnus, that the two shall have a personal battle. Some people try to talk Turnus out of the battle but he refuses to listen. In a chase sequence similar to the Iliad, Aeneas chases Turnus, and eventually gets him in a position to kill him. Finally, Turnus comes to his senses and begs Aeneas to spare his life, or if he doesn't, to give his body back to his people for a proper burial. But when Aeneas sees Turnus wearing the sword-belt of Aeneas' deceased friend prince Pallas, his anger is restored, and Aeneas kills Turnus, and Turnus goes, unhappily, to the underworld. The Aeneid ends at this point.