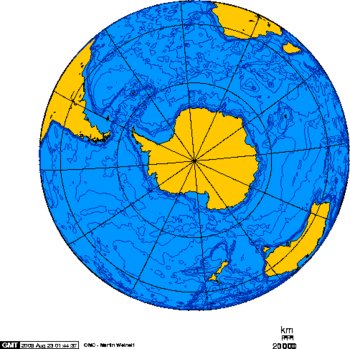 Antarctica is the southernmost continent and is almost entirely south of the Antarctic Circle. The continent contains the South Pole. It shares no land borders with another country, being totally surrounded by the Southern Ocean. As well as the mainland, Antarctica includes many nearby Islands. The area is heavily, though not entirely, covered by ice. The continent covers 12,093,00 square kilometers, excluding sea ice sheets. The highest mountain in Antarctica is the Vinson Massif at 4,897 metres.

The United Nations has decreed that Antarctica should be free of exploitation and that it is neutral territory belonging to no one nation or state. However, several nations have laid claim to sections of the content. In many places these claims overlap.

Antarctica is not a state, it has no citizens and hence no official resident population. Many nations maintain research centers on Antarctica which are manned all year round. Because Antarctica is south of the Antarctic Circle, it enjoys midnight suns in summer. In contrast, in winter it is dark all the time, so that wintering in an Antarctic research center is a dangerous occupation.

James Cook, the British sea captain and explorer, was the first to enter the Antarctic Circle, during his second voyage (1772-1775). He circumnavigated the continent but did not sight land, only sea ice. He observed rock debris in some icebergs, showing that land did exist under the ice. He is quoted as saying, "I make bold to declare that the world will derive no benefit from it."

The Antarctic was not visited again until January 27, 1820, when Captain Thaddeus Bellingshausen, a Russian, recorded a sighting of the continent. An American, Captain John Davis is credited as being the first person to land on Antarctica on February 7th, 1821.

In the late 19th and the beginning of the 20th century, Antarctica became the focus of several scientific expeditions. Sir Ernest Henry Shackleton (1874–1922), the celebrated Anglo-Irish explorer, attempted to reach the South Pole with the Nimrod expedition (1907-09). He failed, but reached further south than anyone so far: he received a hero's welcome upon his return to England and was immediately knighted.

The first man to reach the Geographical South Pole, in the heart of Antarctica, was Roald Amundsen, a Norwegian. He had previously been on several Arctic expeditions and was the first man to navigate and chart the Northwest Passage round the top of Canada and Alaska. His expedition reached the Pole on the 14th of December 1911. Amundsen's achievements are often overshadowed by the story of Captain Scott, who was known as 'Scott of the Antarctic'. Amundsen and Scott were in direct competition to reach the Pole fist, Amundsen beating Scott by just over a month. On the return journey, Scott was caught in a blizzard and he and his companions died.