Brazil (Portuguese: Brasil), officially the Federative Republic of Brazil (Portuguese: República Federativa do Brasil), with over 3 million square miles of territory and a population of 190 million people, is the fifth largest nation in the world by population and is also fifth in terms of area. It is the largest country in South America, bordering the Atlantic Ocean by 8,500 km. The neighbors are French Guiana, Suriname, Guiana, Venezuela, Colombia, Peru, Bolivia, Paraguay, Argentina and Uruguay. 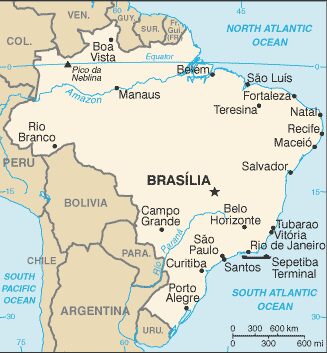 In the 17th century the Netherlands attempted successively to settle in the northern half of the country; after sacking initially the coast of Bahia and capturing briefly the city of Salvador, they then set up in the cities of Recife and Olinda, where they stayed for roughly 30 years until Portuguese and local resistance finally forced their withdrawal.

For almost three centuries Brazil was merely an unimportant supplier of commodities to Portugal, until in 1808 it became effectively the centre of the kingdom: the Portuguese Royal Family was forced to move to Brazil, escaping Napoleon, after an alliance with the United Kingdom which made the escape possible.

In 1864, Brazil entered in a devastating war against Paraguay, known as the War of the Triple Alliance.

Brazil endured more than twenty years of a military dictatorship which, although less violent than its counterparts in the region, severely affected the political and cultural life of the country. In 1985 the military regime peacefully ceded power to civilian rulers, and the country is now one of the largest democracies in the world. Brazil is still an underdeveloped country, and continues to pursue industrial and agricultural growth and development of its interior, exploiting vast natural resources and a large labor pool. Highly unequal income distribution remains a pressing problem.

Brazil was part of the alliance of regional military dictatorships, Operation Condor, formed in 1975.

Brazilian politics and society are continually divided between a wealthy, privileged minority and a poor and uncultured majority. Although, in recent years of this Century a slight improvement is under way, this situation maintain Brazil's status as one of the most unequal societies in the world.