A gas compressor is a machine that increases the pressure of a gas by reducing its volume.

There are primarily two basic types of compressors. One type uses dynamic compression accomplished by the mechanical action of rotating contoured blades which impart velocity and hence pressure to the flowing gases. The other type uses positive displacement accomplished by trapping a volume of gas and displacing it by the action of a piston or a rotating member.

The positive displacement compressors are sub-categorized as either reciprocating compressors or rotary compressors and each of those include a number of different types.

The main types of gas compressors are illustrated in the chart below and each type is then discussed in the following sections: 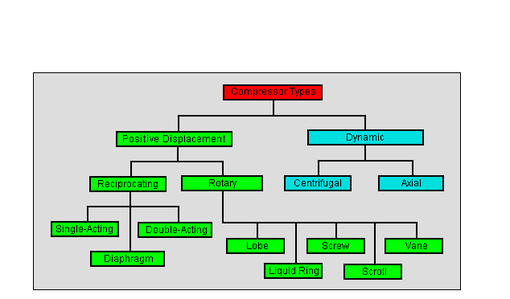 Centrifugal compressors use a rotating disk or impeller in a shaped housing to force the gas to the rim of the impeller, increasing the velocity of the gas. A diffuser (divergent duct) section converts the velocity energy to pressure energy.

They are very widely used for continuous, stationary service in industries such as petroleum refineries, chemical and petrochemical plants, natural gas processing plants and many other industrial facilities.[3][4][5]

Their applications can range from 100 hp (75 kW) to thousands of horsepower. With multiple staging,
centrifugal compressors can achieve extremely high output pressures greater than 10,000 psi (69 MPa).

The compression ratio (i.e., the gas discharge pressure divided by the gas inlet suction pressure) of a centrifugal compressor is typically limited to about 3.5 to 1. To achieve higher compression ratios, a series of compressors (referred to as compression stages) are required.

Since compression generates heat, the compressed gas has to be cooled between stages. The inter-stage coolers may result in some partial condensation of the gas and the condensed liquid is removed in vapor-liquid separators.

Many large snow-making operations (like ski resorts) use this type of compressor. They are also used in internal combustion engines (as superchargers and turbochargers), in small gas turbine engines and as the final compression stage of medium sized gas turbines.

Axial-flow compressors are dynamic rotating compressors that use arrays of fan-like airfoils to progressively compress the working fluid. They are used where there is a requirement for a high flows or a compact design.

The arrays of airfoils are set in rows, usually as pairs: one rotating and one stationary. The rotating airfoils, also known as blades or rotors, accelerate the fluid. The stationary airfoils, also known as a stators or vanes, turn and decelerate the fluid; preparing and redirecting the flow for the rotor blades of the next stage.[3] Axial compressors are almost always multi-staged, with the cross-sectional area of the gas passage diminishing along the compressor to maintain an optimum axial Mach number. Beyond about 5 stages or a 4:1 design pressure ratio, variable geometry is normally used to improve operation.

Axial compressors can have high efficiencies; around 90% polytropic at their design conditions. However, they are relatively expensive, requiring a large number of components, tight tolerances and high quality materials. Axial-flow compressors can be found in medium to large gas turbine engines, in natural gas pumping stations, and within certain chemical plants. 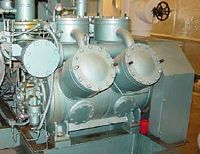 There are two types of screw-compressors, those that utilize a circulating oil to seal and cool the screws and those that operate completely dry (i.e., oil-free).

Figure 6 is a diagram of a complete screw compression system utilizing a circulating oil. Such systems are referred to as oil-bath screw compressors.

Screw compressors are typically used for continuous operation in commercial and industrial applications and may be either stationary or portable. Their applications range from 3 hp (2.24 kW) to over 500 hp (375 kW) and from low pressure to very high pressure (>1200 psi or 8.3 MPa).

A scroll compressor (also known as a scroll vacuum pump) uses two interleaved spiral-like vanes to compress gases. The vane geometry may be involute, archimedean spiral, or hybrid curves.[11][12][13] The scroll compressor concept was first developed in the early 1900s.

A scroll is an involute spiral which, when matched with a mating spiral scroll form as shown in Figure 9, generates a series of crescent-shaped gas pockets between the two scroll elements.

Scroll compressors work by moving one spiral element inside another stationary spiral to create a series of gas pockets that become smaller and increase the pressure of the gas. The largest openings are at the outside of the scroll where the gas enters. As these gas pockets are closed off by the moving spiral, the pockets move towards the center of the spirals and become smaller and smaller. This increases the pressure of the gas until it reaches the center of the spiral and is discharged through a port near the center of the scroll. The entire process is continuous.

The moving scroll orbits in an eccentric path within the stationary (fixed) scroll as it creates the series of gas pockets. During compression, several pockets are being compressed simultaneously, resulting in a very smooth process. Maintaining an even number of gas pockets on opposite sides reduces any vibration inside the compressor.

The two scrolls (one colored blue and the other colored pink) can be seen in the right center of the photo in Figure 9.

Scroll compressors are very widely used, for example, in air conditioning systems. They operate more smoothly, quietly, and reliably than other types of compressors in the lower volume range. 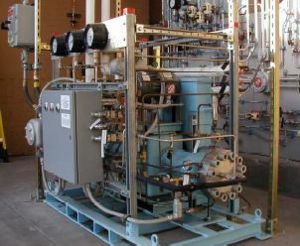 Diaphragm compressors are used for hydrogen and compressed natural gas (CNG) as well as in a number of other applications.

The photograph included in this section (Figure 8) depicts a three-stage diaphragm compressor used to compress hydrogen gas to 6,000 psi (41 MPa) for use in a prototype compressed hydrogen and compressed natural gas (CNG) fueling station built in downtown Phoenix, Arizona by the Arizona Public Service company (an electric utilities company). Reciprocating compressors were used to compress the natural gas.

The prototype alternative fueling station was built in compliance with all of the prevailing safety, environmental and building codes in Phoenix to demonstrate that such fueling stations could be built in urban areas. 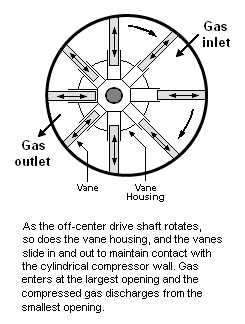 With suitable port connections, the rotary vane devices may be either a compressor or a vacuum pump. They can be either stationary or portable, single or multi-staged, and driven by electric motors or internal combustion engines. Dry vane machines are used at relatively low pressures (e.g., 200 kPa) for bulk material movement whilst oil-injected machines have the necessary volumetric efficiency to achieve pressures up to about 1.30 MPa in a single stage. A rotary vane compressor is well suited to electric motor drive and is significantly quieter in operation than the equivalent piston compressor.

There are many types of equipment, often referred to as prime movers, which can be used to drive a compressor:

Gas compressors are used in various applications where either higher gas pressures or lower volumes of gas are needed: