Vapor-compression refrigeration[1][2][3] is one of the many refrigeration cycles available for use. It has been and is the most widely used method for air conditioning of large public buildings, private residences, hotels, hospitals, theaters, restaurants and automobiles. It is also used in domestic and commercial refrigerators, large-scale warehouses for storage of foods and meats, refrigerated trucks and railroad cars, and a host of other commercial and industrial services. Petroleum refineries, petrochemical and chemical plant processing plants, and natural gas processing plants are among the many types of industrial plants that often utilize very large-scale vapor-compression refrigeration systems.

Description of the vapor-compression refrigeration 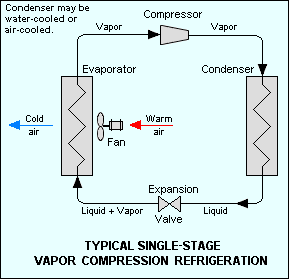 Vapor-compression refrigeration uses a circulating liquid refrigerant as the medium which absorbs and removes heat from the space to be cooled and subsequently rejects that heat elsewhere. Figure 1 depicts a typical vapor-compression system. All such systems have four components: a compressor, a condenser, an expansion valve (also called a throttle valve), and an evaporator.[3] Circulating refrigerant enters the compressor in the thermodynamic state known as a saturated vapor and is compressed to a higher pressure, resulting in a higher temperature as well. The hot, compressed vapor is then in the thermodynamic state known as a superheated vapor and it is at temperature and pressure at which it can be condensed with typically available cooling water or cooling air. That hot vapor is routed through a condenser where it is cooled and condensed into a liquid by flowing through a coil or tubes with cool water or cool air flowing across the coil or tubes. This is where the circulating refrigerant rejects heat from the system and the rejected heat is carried away by either the water or the air (whichever may be the case).

The condensed liquid refrigerant, in the thermodynamic state known as a saturated liquid, is next routed through an expansion valve where it undergoes an abrupt reduction in pressure. That pressure reduction results in the adiabatic flash evaporation of a part of the liquid refrigerant. The auto-refrigeration effect of the adiabatic flash evaporation lowers the temperature of the liquid and vapor refrigerant mixture to where it is colder than the temperature of the enclosed space to be refrigerated.

The cold mixture is then routed through the coil or tubes in the evaporator. A fan circulates the warm air in the enclosed space across the coil or tubes carrying the cold refrigerant liquid and vapor mixture. That warm air evaporates the liquid part of the cold refrigerant mixture. At the same time, the circulating air is cooled and thus lowers the temperature of the enclosed space to the desired temperature. The evaporator is where the circulating refrigerant absorbs and removes heat which is subsequently rejected in the condenser and transferred elsewhere by the water or air used in the condenser.

To complete the refrigeration cycle, the refrigerant vapor from the evaporator is again a saturated vapor and is routed back into the compressor. 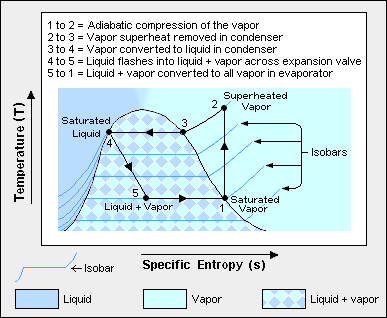 The thermodynamics of the vapor compression cycle can be analyzed on a temperature versus entropy diagram[1][3] as depicted in Figure 2. At point 1 in the diagram, the circulating refrigerant enters the compressor as a saturated vapor. From point 1 to point 2, the vapor is isentropically compressed (i.e., compressed at constant entropy) and exits the compressor as a superheated vapor.

From point 2 to point 3, the superheated vapor travels through part of the condenser which removes the superheat by cooling the vapor. Between point 3 and point 4, the vapor travels through the remainder of the condenser and is condensed into a saturated liquid. The condensation process occurs at essentially constant pressure. The condensation process is where heat is rejected from the system by transfer to the air or water used to condense the vapor.

Between points 4 and 5, the saturated liquid refrigerant passes through the expansion valve and undergoes an abrupt decrease of pressure. That process results in the adiabatic flash evaporation and auto-refrigeration of a portion of the liquid (typically, less than half of the liquid flashes). The adiabatic flash evaporation process is isenthalpic (i.e., occurs at constant enthalpy).

The evaporator operates at essentially constant pressure. The resulting saturated refrigerant vapor returns to the compressor inlet at point 1 to complete the thermodynamic cycle.

It should be noted that the above discussion is based on the ideal vapor-compression refrigeration cycle which does not take into account real world items like frictional pressure drop in the system, slight internal irreversibility during the compression of the refrigerant vapor, or non-ideal gas behavior (if any).

"Freon" is a trade name for a family of haloalkane refrigerants manufactured by DuPont and other companies. These refrigerants were commonly used due to their superior stability and safety properties: they were not flammable nor obviously toxic as were the fluids they replaced.

Unfortunately, the chlorine-bearing haloalkanes reach the upper atmosphere when they escape. In the stratosphere, chlorofluorocarbons (CFCs) break up due to UV-radiation, releasing their chlorine atoms. These chlorine atoms act as catalysts in the breakdown of ozone, which damages the ozone layer that shields the Earth's surface from the Sun's strong UV radiation. The chlorine will remain active as a catalyst until and unless it binds with another particle, forming a stable molecule. CFC refrigerants in common but receding usage include those named R-11 and R-12.

Newer and more environmentally-safe refrigerants include hydrochlorofluorocarbons (HCFCs) such as chlorodifluoromethane, known as R-22, used in most homes today and hydrofluorocarbons (HFCs) such as R-134a, used in most cars. These have replaced most CFC use. HCFCs in turn are being phased out under the Montreal Protocol and replaced by HFCs, such as R-410A, which lack chlorine.

Newer refrigerants are currently the subject of research, such as supercritical carbon dioxide, known as R-744. These have similar efficiencies compared to existing CFC and HFC based compounds.

Most large-scale industrial refrigeration systems do not use haloalkanes. Instead, they use ammonia or hydrocarbons such as methane, ethane, propane or butane.

Refrigerants used for other than large industrial systems

Other items of interest are:

In 1805, American inventor Oliver Evans described in detail, but never built, a refrigeration system based on the vapor-compression refrigeration cycle.[6]

An American living in Great Britain, Jacob Perkins, improved upon the design proposed by Oliver Evans and obtained the first patent for a vapor-compression refrigeration system in 1834.[7] Perkins built a prototype system and it actually worked.[8][9] According to the drawing in Perkins' patent, liquid ether (C4H10O) was contained in an "evaporator vessel" where it was vaporized under a partial vacuum maintained by the suction of a crude hand-operated compressor. The evaporator vessel was submerged in a liquid from which the heat required to vaporize the ether was extracted, thereby cooling the liquid. The compressed ether vapor from the compressor discharge was then condensed back into liquid either by flowing through piping coils submerged in water. The liquid ether then returned through a pressure reduction valve (i.e., an expansion valve) into the partial vacuum of the evaporator vessel. Clearly, Perkins' system included the four principal features uses by modern vapor-compression refrigeration systems, namely an evaporator, a compressor, a condenser and an expansion valve. Unfortunately, Perkins had no success in commercializing his system.[8]

In 1842, an American physician, John Gorrie, designed the first system for refrigerating water to produce ice. He also conceived the idea of using his refrigeration system to cool the air in the rooms of a Florida hospital used for treating yellow-fever and malaria patients. His system compressed air, then partially cooled the hot compressed air with water before allowing it to isentropically expand while doing part of the work required to drive the air compressor. The isentropic expansion cooled the air to a temperature low enough to freeze water and produce ice, or to flow "through a pipe for effecting refrigeration otherwise" as stated in his United States patent granted in 1851.[10] Gorrie, who had given up his medical practice, built a working prototype and sought to raise money to manufacture his machine, but the venture failed and his system was a commercial failure.

Alexander Catlin Twining,[11] a professor of engineering, mathematics and astronomy at Middlebury College in Connecticut, began experimenting with vapor-compression refrigeration in 1848 and obtained British and American patents in 1850 and 1853 for a vapor-compression system capable of using either carbon dioxide (CO2), ammonia (NH3) or ether.[12] He is credited by many with having initiated commercial refrigeration in the United States by building an ice plant in 1855 at Cleveland, Ohio that produced about 2000 pounds (900 kilograms) of ice per 24 hours.

Meanwhile in Australia, engineer James Harrison[13] built a commercial ice-making machine in 1854 and his patent for a vapor-compression refrigeration system using liquid ether was granted in 1855. Harrison introduced commercial vapor-compression refrigeration to breweries and meat packing houses, and by 1861 a dozen of his systems were in operation.

Carl von Linde[14], an engineering professor at the Technological University Munich in Germany, patented an improved method of liquefying gases in 1876. His new process made possible using gases such as ammonia, sulfur dioxide (SO2) and methyl chloride (CH3Cl) as refrigerants and they were widely used for that purpose until the late 1920’s. By then, a number of accidents related to the use of those refrigerants convinced manufacturers that a more stable element was needed. That led to the development and widespread use of chlorofluorocarbons (CFCs) until it was found that CFCs led to damaging of the Earth's ozone layer and their use was largely phased out in favor of refrigerants that do not contain any chlorine (Cl).