Malaria, caused by four species of Plasmodium protozoa and spread by mosquitoes, causes more deaths, worldwide, than any other vector-borne disease. Coping with malaria must be a two-pronged strategy of preventing and treating the disease in humans, and eradicating the disease-carrying mosquito vectors. The World Health Organization considers it the greatest problem among tropical diseases:[1]

WHO, in its 2008 report on malaria, in no way minimizes the problem, but sees several areas of distinct progress. Some, however, are already showing difficulties." Half of the world's population is at risk of malaria.

For many years, the rough estimate of a million deaths per year was the conventional wisdom, but a major study in 2001, updated in 2004, indicates the Mortality and morbidity of malaria is worse than that.[2] Three organizations guided the project:

The advent of long-lasting insecticidal nets and artemisinin-based combination therapy (ACT), plus a revival of support for indoor residual spraying of insecticide, presents a new opportunity for large-scale malaria control. "[3] 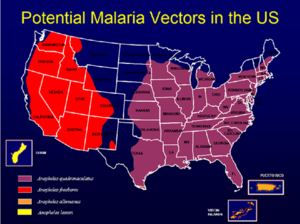 Areas where malaria could re-establish in the U.S

Developed countries cannot be complacent. It has been assessed as a world threat in an U.S. National Intelligence Estimate.

The protozoa, of the genus Plasmodium, are carried in the saliva of Anopheles mosquitoes, which reproduce in stagnant water. There are four species: P. falciparum, P. vivax, P. ovale, and P. malariae.

Vectors carry the protozoan parasites to the victim.

The mosquito vector is present in many parts of the world, and refugees from endemic areas potentially can introduce it, as shown in he U.S. map with areas that have the appropriate mosquitoes. While malaria, in the U.S., there are 1500 cases of malaria annually in the U.S., which could get into the mosquito population.[4] five cases of malaria were diagnosed in 2007, among Burundian refugees who had settled in the state of Washington, in the western United States. [5]

Further, while mosquitoes are the natural vector, malaria certainly can be spread through shared hypodermic needles, either from intravenous drug abuse, or in areas where the healthcare system cannot afford either disposable hypodermics or proper sterilization. Malaria can be transmitted by contaminated blood transfusions.

Mortality and morbidity of malaria

Worldwide number of cases are estimated to be 90 million, with 500 million infected people. While figures from 900,000 to 1 million deaths had been used, this excluded Africa partially or completely, certain outside urban centers. 90 percent of cases are believed to be in Africa. " in the 1990s, 26 percent of the more than 1,500 children born in rural western Kenya died over a four-year period.[6] Neonatal and infant mortality were 32 per 1,000 and 176 per 1,000 [7]

Simple mechanical means are the starting point in controlling them: minimizing standing water and using netting. Appropriate insecticide and insect repellents have a role, although resistance to the main insecticides, DDT and pyrethrins, is increasing and there are no immediate alternatives. The basic techniques can be enhanced with :

Integrated Vector Management (IVM) strategies to kill the developing larvae have to be tailored to each environment. These are long-term activities needing long-term funding and political commitment.

While there is no vaccine, chemoprophylaxis can be effective, although, as with the use of anti-malarial drugs to treat active infection, drug resistance is an increasing problem.

Drug treatment has been challenging. Many of the agents effective against parasites have significant toxicity, and Plasmodium sp. also become resistant. Even recently, major side effects such as increased psychosis became apparent only when a drug went into widespread use. [8]

It is so common, in many areas of Africa, that fever and chills are routinely treated with antimalarial drugs. Misdiagnosis here adds not only to malaria drug resistance, but resistance to other drugs.

In the industrialized world, it is principally a disease of travelers. Clinicians encountering possible malaria must maintain a high index of suspicion, and be sure to take travel histories. Coinfection with other tropical diseases should add suspicion.

Malaria was one of the first drugs with a specific treatment, the alkaloid quinine, from cinchona tree bark, also called Jesuit's Bark. Quinine rarely is a complete cure but suppresses symptoms and is relatively toxic. With the advent of synthetic drugs in the Second World War, it was gradually replaced, although it still has a significant role as a backup drug for resistant forms.

Quinine is intensely bitter. Before tablet and capsule dosage forms were common, it had to be drunk. The British, in India, turned an unpleasant task of taking quinine for chemoprophylaxis into a pleasant daily ritual, by incorporating quinine into alcoholic drink mixer "tonics". One's gin-and-tonic was, aside from other attractions, the means of less painfully ingesting one's daily quinine dose.

The first synthetic alternative to quinine was quinacrine, widely known by the trade name of Atabrine. First made in Germany in the 1930s, its distribution to U.S. troops at risk began in 1942. Compliance was a problem, as it turned the skin yellow, and casused nausea, vomiting, diarrhea, skin staining, psychosis, lichen planus, and exfoliative dermatitis. Weina observed that the first dose was often given to troops aboard a ship approaching a combat area, so anxiety, seasickness, and gastrointestinal upset were therefore blamed on the drug when other factors could have been responsible.[8] Military folklore also claimed that quinacrine caused impotence.

The next major drug, chloroquine, was discovered by a German, Hans Andersag, in 1934 at Bayer I.G. Farbenindustrie A.G. laboratories in Eberfeld, Germany. He named his compound resochin. Through a series of lapses and confusion brought about during the war, chloroquine was finally recognized and established as an effective and safe antimalarial in 1946 by British and U.S. scientists. [9] Chloroquine has activity against other parasites, and is, with derivatives, a member of the "antimalarial" subclass of disease-modifying antirheumatic drugs. It may be the single most useful antimalarial drug, although it certainly has its limitations.

By 1947, comparisons were possible, and chloroquine was most preferred. [10] Subsequent comparisons between chloroquine and hydroxychloroquine show the former is more effective, more toxic, and cheaper.

More general antibiotics, including clindamycin, doxycycline and tetracycline have activity. Since their action against active parasites may be slower than that of other drugs, they tend to be preferred for prophylaxis, or in multidrug regimens where their specific modes of action are synergistic with faster-acting drugs.

Approved in 2000 was the fixed-combination, for prophylaxis and treatment, of atovaquone-proguanil.

Where the disease is not endemic, and the illness is not immediately life-threatening, laboratory diagnosis of the specific Plasmodium species, along with the travel history, will help guide the choice of the appropriate drug treatment. [11] The disease must be reported to local and national public health authorities in non-endemic areas, especially in severe cases where organizations such as the CDC may stock drugs not normally available.

Among the most valuable drugs doday is artemisinin, which was first available as a Chinese herbal preparation. It has been synthesized to help meet demand. To minimize resistance formation, the standard of care defined by the World Health Organization is artemisin combination therapy (ACT), either with the original drug or a derivative. Artemisin itself has relatively low bioavailability and has been banned in some countries, to avoid resistance formation due to underdosage

Artesunate is a derivative that produces higher blood levels when given intravenously. In 2007, the U.S. Centers for Disease Control (CDC) received an exception from the Food and Drug Administration to Artesunate in the United States, specifically for treatment of malarial clinical emergencies; CDC will dispense it to requesting organizations that meet treatment criteria. [12]

There is a significant drug counterfeiting problem, which is contributing to resistance.