Plasmodium falciparum, the causative agent of malaria, lives in human red blood cells. If one looks at a blood smear or blood film of a person infected with the malarial parasite, P. falciparum, they would probably see the immature trophozoites and gametophytes. The schizonts and the mature trophozoites are most likely not seen because they are imbedded in the tissues. The red blood cells that have been infected would be seen and they may contain more than one parasite. Faint comma-shaped red dots also appear on the surface of the erythrocytes and these are called the “Maurer’s dots”. They may cluster together in the form of a pear shape.[1]

The Plasmodium falciparum genome is a difficult one to sequence because it is very complicated. Therefore, there were three institutions that divided the 14 chromosomes among themselves in the Malaria Genome Project. Stanford University sequenced chromosome 12, The Institute for Genomic Research and the Malaria Program of the Naval Medical Research Center worked on chromosomes 2, 10, 11 and 14 and the Sanger Centre sequenced chromosomes 1, 3-9, 13. The chromosome-by chromosome method was preferred instead of trying to sequence the entire genome by the shotgun method.[3]

The Plasmodium falciparum genome is approximately 23 mega base pairs long. It consists of fourteen chromosomes with varying sizes from 0.643 to 3.29 mega base pairs long. The chromosomes are linear. The adenine to thymine composition is about 80.6% and about 90% in introns and intergenic areas. Fifty four percent of the genes contained introns and these genes were long about 2.3 kilo bases. In the genome, 5300 protein encoding genes were determined. That is about 1 gene for every 4338 base pairs. No transposable elements or retro-transposons were found. There were proteins on genes that were not recognized as well.

When a human is bitten by an infected Anopheles mosquito, sporozoites are released in the human circulatory system. Soporzoites consist of an outer and a double inner membrane which lie on top of microtubules. They are approximately 10-15 micrometers long and contain three polar rings. After entering the circulatory system, the sporozoites travel to the liver where they replicate asexually producing merozoites. Merozoites then take over the erythocytes and they develop into trophozoites (large rings). The trophozoites eat the host’s cytoplasm and break down hemoglobin to peptides.

Exoerythrocytic schizonts are formed after numerous cycles of nuclear division of the trophozoites. The schizonts then undergo budding and merozoites are once again formed. The red blood cells rupture and the merozoites escape. They can now infect more red blood cells and when this happens, immature gametocytes may form instead of trophozoites. Another mosquito may feed on the infected individual and in turn accumulate these gametocytes in their bodies. A flagellated microgamete is formed after a male zygote undergoes fast nuclear division and this fuses with a female zygote. This fertilization produces an oocyte which resides in the gut wall of the mosquito. When this burst, sporozoites are released and they journey to the mosquito’s saliva. This mosquito then bites and infects another human and the cycle is repeated.

In the erythrocytic stage of the life cycle, the hemoglobin in the host’s blood is used as food for Plasmodium falciparum. Hemoglobin is a protein and it is broken down into peptides. Hemazoin is the form in which the heme group is released and detoxified. In the same stage of the life cycle, the erythrocytic stage, Plasmodium falciparum makes it energy by the process of anaerobic glycolysis whereby the pyruvate molecule is converted to lactate. In P. falciparum, the main function of the Krebs Cycle is to produce succinyl-CoA which is important in the catabolism of the heme group of hemoglobin. All the amino acids needed by the parasite are acquired from the host or from the metabolism of hemoglobin. The breakdown of lipids to fatty acids could probably be done by the apicoplast of P. falciparum. However, this is just hypothesized. It is yet to be determined. Purines are not metabolized by this parasite but it is obtained from the host. But, pyrimidines are metabolized from glutamine, bicarbonate and aspartate.

Plasmodium falciparum is present throughout the world. It is most abundant in tropical/subtropical areas where it is warm and humid in order for the mosquitos vectors to replicate. 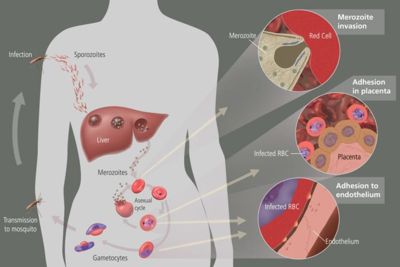 The human body’s immune system cannot destroy the parasite because it lives in the liver and blood cells for majority of the time and is out of reach. However, the spleen can destroy the red blood cells that are floating around in the circulatory system. To prevent this from happening, P. falciparum exhibits adhesive proteins (PfEMP1- Plasmodium falciparum erythrocyte membrane protein 1 and rifin proteins) on the infected red blood cell’s surface making them adhere to the walls of small blood vessels and thus avoiding their entry into the spleen or general circulation area. This is cause for hemorrhagic fever. Very small veins can even be blocked by the adhesive proteins which is responsible for placental and cerebral malaria.

The immune system is too slow to fight these parasites since there are multiple variations of the same PfEMP1 adhesive protein (continuously changing its appearance). Hence, the two major virulence factors of P. falciparum are PfEMP1 and rifin proteins. Pregnant women are main targets for infected mosquitos and so malaria is prevalent among them. The result of this is high infant mortality, stillbirths and very small babies being born.

Malaria patients have chills, fever and sweating that continuously comes and goes. When P. falciparum attacks an individual’s red blood cells, there is an increase in the temperature of the body and he/she feels really hot. When the red blood cells rupture, the individual feel cold and have extremely intense chills. The person may also feel nauseated, vomit or have diarrhea. Jaundice and anemia can also occur because there is loss of iron when the red blood cells are destroyed. The worst malaria cases caused by P. falciparum may have kidney or liver failure, coma and eventually the person would die. 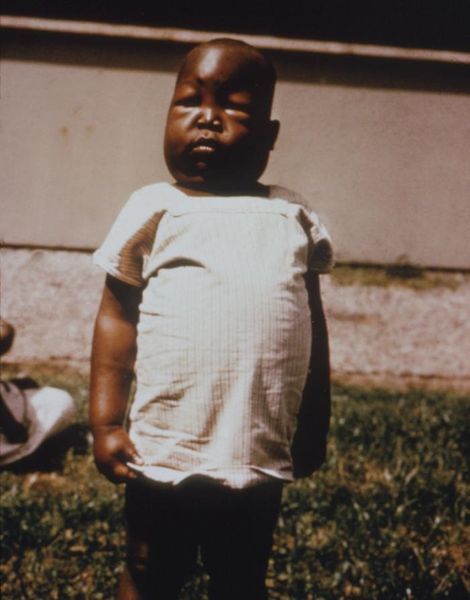 Plasmodium falciparum has caused a huge increase in poverty. The cost to treat one case of malaria is equivalent to 10 working days in Africa. The price can vary from $US0.80 - $US5.30 depending on drugs prescribed. In some countries, there can be an economic crisis which can result in a disorder and lack of health services. So, most people will try to treat themselves and they would not undergo complete treatment (i.e. take all of the medication). Hence, P. falciparum would become resistant to the drugs that were once effective.[4]

Malaria is a complex disease. If detected early could be cured or prevented because the technology is there and just needs to be applied in the right time. There are approximately 200-300 million Malaria Cases and 2-3 million deaths worldwide each year. Most deaths are caused by P. falciparum. In U.S., there are about 1200 Malaria Cases each year from indirect transmission (people returning from trips or people coming into the country for the first time).

A lot of research is being done on Plasmodium falciparum in order to get rid of the disease. Researchers are hoping to discover new drugs and vaccines that could treat the disease or remove it entirely from the world.

Researchers have been trying to find a new drug that would terminate the function of an important enzyme used by P. falciparum. They would like to discover a drug that can inhibit plasmepsins I and II, Plm I and Plm II. In P. falciparum, Plm I is the first to cleave the hemoglobin. Plm II also cleaves but it mainly takes action against denatured hemoglobin. Plm I and Plm II is said to be homologous to aspartic acid proteases, such as Cathepsin D (Cat D) in mammals. It would good if researchers can find an antimalarial drug that can stop Plm I from breaking down hemoglobin so that the P. falciparum parasite can die. Pepstatin A inhibits aspartic protease and prevents hemoglobin degradation. So this might be a successful drug. Researchers are also in the process of creating artificial inhibitors. Plm II has a small difference in structure from Cat D and this could be a problem. Also since Pepstatin A inhibits Plm I and Plm II, researchers have yet to see if it affects the host’s enzymes in this way as well. Then this would not be good.

Researchers have been also trying to develop vaccines that can stop the parasite at the different stages of its life cycle. Hence, antigens are needed for each stage of the cycle to allow both humoral and cellular immunity. The best vaccines would be a multicomponent vaccine that can take care of all the variations of antigens. Many vaccines were developed throughout time but they were not very successful since they only helped solved some of the problems. SPf66 is a multicomponent vaccine that was developed but this only caused limited immunity. There was also vaccinia virus based vaccine NYVACPf-7 which contained antigens for seven stages of the P. falciparum life cycle. It caused high cellular immunity but very little humoral immunity. In one of the latest experiments, there is hope that the gene CDC/NIIMALVAC-1 which was created would turn out to be successful. This gene encodes for six T-cells, twelve B-cells and three cytotoxic T lymphocyte and all came from antigens specific for nine stages of the life cycle. When tested on rabbits, it resulted in both humoral and cellular immunity and worked at all nine stages.[5]

Scientists are also trying to find ways in which they can control malaria. They are looking into disrupting the genes of the mosquito vector. Also, they want to bring into the mosquito population, a protozoan parasite that might shorten the mosquitoes life cycle so they will be smaller in size and need a smaller blood supply or meal and lay less eggs. There is hope also for this protozoan to diminish the mosquitos’ energy. To obtained good results from an experiment like this, many tests must be performed and researchers must have sufficient knowledge about the genetic make up of the mosquito population.