A pump is a device used to move and/or pressurize fluids such as liquids or slurries. A pump moves fluids from lower pressure to higher pressure and overcomes the difference in pressure by adding energy to the system. Therefore a pump needs something or someone to provide energy (or power) to operate it. A pump's casing has separate openings for the fluid to enter and exit the pump. A pump's inlet and outlet are commonly described as suction and discharge. Compressors, which are used to compress and move gases, have similarities to pumps.

Special pumps called vacuum pumps are used to evacuate fluids, usually gases, from a confined space to create a vacuum within.

The earliest type of pump was the Archimedes screw, first used by Sennacherib, King of Assyria, for the water systems at the Hanging Gardens of Babylon and Nineveh in the 7th century BC, and later described in more detail by Archimedes in the 3rd century BC.[1] In the 13th century AD, al-Jazari described and illustrated different types of pumps, including a reciprocating pump, a double-action pump, a water pump and a piston pump.[2][3] 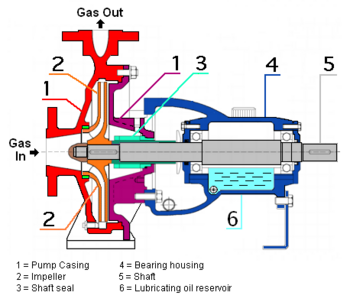 Centrifugal pumps are rotodynamic pumps which convert mechanical energy into hydraulic energy by centripetal force on the liquid. Typically, a rotating impeller increases the velocity of the fluid. The casing, or volute, of the pump then acts to convert this increased velocity into an increase in pressure. So the mechanical energy is converted into a pressure head by centripetal force, the pump is classified as centrifugal pump. Such pumps are found in virtually every industry, and in domestic service in developed countries for washing machines, dishwashers, swimming pools and water supply.

A wide range of designs are available, with constant and variable speed drivers. Horizontal shafts are the most common. Single-stage pumps are usual in the smaller ratings. Pumps with up to 11 stages are in service. A demanding duty is pumping boiler feedwater, and today's designs are typically 3 - 4 stage, with speeds of up to 6,000 revolutions per minute.

After electrical motors, centrifugal pumps are arguably the most common machine, and they are a significant user of energy. It is not unusual for a pump to be found to be over-sized, having been selected poorly for its intended duty. Running an over-sized constant speed pump throttled causes energy waste. A condition monitoring test can detect this condition and help size a smaller impeller, either new, or by machining the initial one, to achieve energy reduction.

Pumps also wear internally, at a rate varying with the liquid pumped, materials of construction and operating regime. Again, condition monitoring can be applied to detect and quantify the extent and rate of wear and also help decide when overhaul is justified on an energy-saving basis. 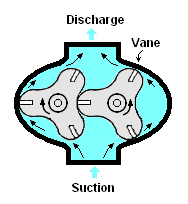 The low pulsation rate and gentle performance of the Roots-type positive displacement pump is achieved due to a combination of its two 90° helical twisted rotors, and a triangular shaped sealing line configuration, both at the point of suction and at the point of discharge. This design produces a continuous flow with equal volume. High capacity industrial "air compressors" have been designed to employ this principle as well as most "superchargers" used on internal combustion engines. 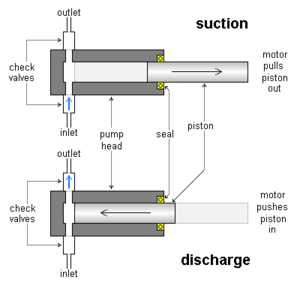 Reciprocating-type pumps use a piston and cylinder arrangement with suction and discharge check valves integrated into the pump. Pumps in this category range from "simplex" having one cylinder, to in some cases "quad" having four cylinders or more. Most reciprocating-type pumps are "duplex" having two cylinders or "triplex" having three cylinders. Furthermore, they are either "single acting" independent suction and discharge strokes or "double acting" suction and discharge in both directions. The pumps can be powered by air, steam or through a belt drive from an engine or motor. This type of pump was used extensively in the early days of steam propulsion (19th century) as boiler feed water pumps. Though still used today, reciprocating pumps are typically used for pumping highly viscous fluids such as heavy oils or concrete or as metering or chromatography pumps.

Another modern application of positive displacement pumps are compressed air-powered double-diaphragm pumps. They are relatively inexpensive, and are used extensively for pumping water out of bunds, or pumping low volumes of reactants out of storage drums.

A peristaltic pump has a flexible compressible tube (for each stream) and rollers which roll along the length of the tube compressing it to carry a plug of fluid along from inlet to outlet. These are commonly rather simple, low pressure, low flow rate pumps used sometimes for select applications.

Because of the wide variety of applications, pumps have a plethora of shapes and sizes: from very large to very small, from high pressure to low pressure, and from high volume to low volume. 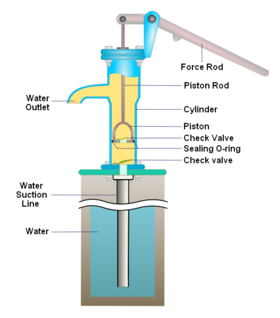 One type of pump once common worldwide was a hand-powered water pump over a water well where people could use it to extract water, before most houses had individual water supplies.

Today, hand operated village pumps are considered the most sustainable low cost option for safe water supply in resource poor settings, often in the rural areas of developing countries. A hand pump opens access to deeper groundwater that is often not polluted and also improves the safety of a well by protecting the water source from contaminated buckets.

Commonly small, simple, cheap, disposable hand pumps are used as dispensers on consumer product bottles. These hand pumps dispense a small amount of liquid, lotion, gel, etc. in one or more strokes when operated by hand. Their design is a simplified version of the hand-powered water pump shown at right. Larger non-disposable versions of hand pumps are used to pump out fluids from barrels or similar containers. Also hand- or foot-operated pumps are used to fill tires, air mattresses, etc. with air.

Pumps have been powered by water flow, internal combustion engines, electric motors, manually as with hand pumps, steam turbines, and by wind power. Solar power has been used to power pumps for remote locations.[4]