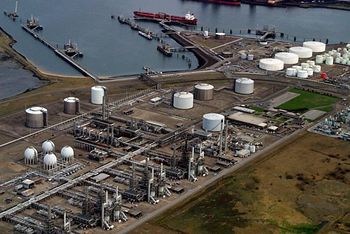 Petrochemicals are chemical products made from the hydrocarbons present in raw natural gas and petroleum crude oil. The largest petrochemical manufacturing industries are to be found in the United States, Western Europe, Asia and the Middle East.

As of 2007, there were 2,980 operating petrochemical plants in 4,320 locations worldwide.[3] The petrochemical end products from those plants include plastics, soaps, detergents, solvents, paints, drugs, fertilizer, pesticides, explosives, synthetic textile fibers and rubbers, flooring and insulating materials and much more.

Petrochemicals are found in such common consumer products as aspirin, cars, clothing, compact discs, video tapes, electronic equipment, furniture, and a great many others.[4] 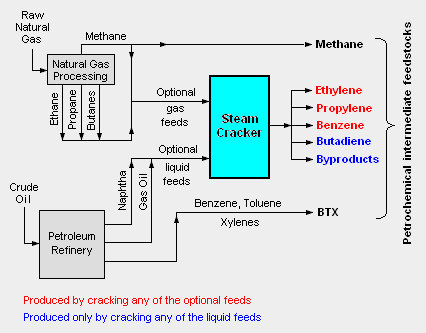 In 2007, the amounts of ethylene and propylene produced in steam crackers were about 115 Mt (megatonnes) and 70 Mt, respectively.[7] The output ethylene capacity of large steam crackers ranged up to as much as 1.0 – 1.5 Mt per year.[8][9]

Steam crackers are not to be confused with steam reforming plants used to produce hydrogen and ammonia.

The effect of feedstock selection upon the yields of steam cracking products is summarized in the table below:

As another example, this is the network diagram for the chemicals that may be derived from benzene as the petrochemical feedstock:

As more examples, these are the network diagrams for the chemicals that may be derived from toluene and from xylenes as the petrochemical feedstocks: