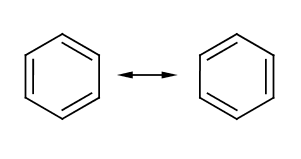 (CC) Image: Paul Derry
The commonly recognized, but somewhat inaccurate Kekulé representation of Benzene, which Kekulé said came to him in a dream

Benzene (C6H6) is a six carbon aromatic compound commonly used in industry as a precursor for other important aromatics such as toluene, or benzoic acid. The structure of benzene could not easily be determined due to its unusual electronic characteristics. While it appears to consist of alternating single and double bonds, it is more accurate to view it as being composed of 6 single bonds with the six electrons from the double bond in a ring. However, structures based on this fact tend to be less informative, so Kekule's representation is still used.