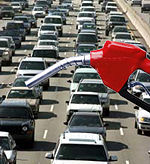 (PD) Photo: U.S. Government
Automobiles for personal use are the largest consumers of gasoline.

Gasoline or petrol is a fuel, derived from petroleum crude oil, for use in spark-ignited internal combustion engines. Conventional gasoline is mostly a blended mixture of more than 200 different hydrocarbon liquids ranging from those containing 4 carbon atoms to those containing 11 or 12 carbon atoms. It has an initial boiling point at atmospheric pressure of about 35 °C (95 °F) and a final boiling point of about 200 °C (395 °F).[1][2][3][4] Gasoline is used primarily as fuel for the internal combustion engines in automotive vehicles as well in some small airplanes.

In Canada and the United States, the word "gasoline" is commonly used and it is often shortened to simply "gas" although it is a liquid rather than a gas. In fact, gasoline-dispensing facilities are referred to as "gas stations".

Most current or former Commonwealth countries use the term "petrol" and their dispensing facilities are referred to as "petrol stations". The term "petrogasoline" is also used sometimes. In some European countries and elsewhere, the term "benzin" (or a variant of that word) is used to denote gasoline.

In aviation, "mogas" (an abbreviation for "motor gasoline") is used to distinguish automotive vehicle fuel from aviation fuel known as "avgas".

Gasoline and other end-products are produced from petroleum crude oil in petroleum refineries. For a number of reasons it is very difficult to quantify the amount of gasoline produced by refining a given amount of crude oil: 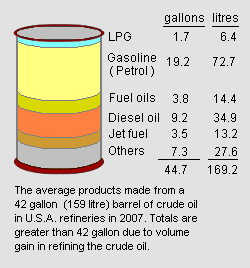 However, as an average of all the refineries operating in the United States in 2007,[5] refining a barrel of crude oil (i.e., 42 gallons or 159 litres) yielded 19.2 gallons (72.7 litres) of end-product gasoline as shown in the adjacent image. That is a volumetric yield of 45.7 percent. The average refinery yield of gasoline in other countries may be different.

From the viewpoint of performance when used in automotive spark-ignited internal combustion engines, the most important characteristic of a gasoline is its octane rating (discussed later in this article). Paraffinic hydrocarbons (alkanes) wherein all of the carbon atoms are in a straight chain have the lowest octane ratings. Hydrocarbons with more complicated configurations such as aromatics, olefins and branched paraffins have much higher octane ratings. To that end, many of the refining processes used in petroleum refineries are designed to produce hydrocarbons with those more complicated configurations.

Some of the most important refinery process streams that are blended together to obtain the end-product gasolines[6] are:

Properties that determine the performance of gasoline 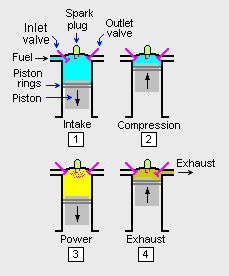 The adjacent image depicts what occurs in one of the combustion cylinders of a gasoline-fuelled, spark-ignited internal combustion engine operating in a 4-stroke cycle. Each cylinder in the engine has a movable piston that can slide upward and downward within the cylinder. Although not shown in the image, the bottom of the piston is connected to a rotating central crankshaft by a so-called connecting rod. The cycle starts with the piston at the top of the cylinder (i.e., where the piston is farthest away from the crankshaft axis) and the inlet and exhaust valves are closed. Then:

In a typical multiple-cylinder engine, the timing of the each cylinder's cycle is such that the crankshaft is kept in continuous rotation. 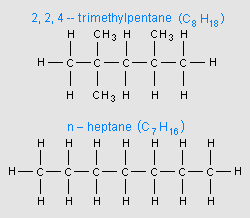 If the gasoline spontaneously ignites and detonates (i.e., explodes) before it is ignited by the spark plug, it causes an abnormal phenomenon known as knocking, pinging or spark knock. The knocking is quite audible and prolonged knocking will damage an engine.

In the United States and Canada, the octane rating shown on the pumps in gasoline dispensing stations is the average of the gasoline's RON and the MON. That average is sometimes referred to as the Pump Octane Number (PON), the Anti-Knock Index (AKI), the Road Octane Number (RdON) and very often simply as (RON + MON)/2) or (R + M)/2. In Europe and Australia and other countries, the octane rating shown on the pumps is most often the RON.

The vapor pressure of a gasoline is a measure of its propensity to evaporate (i.e., its volatility) and high vapor pressures result in high evaporative emissions of smog-forming hydrocarbons which are undesirable from the environmental viewpoint. However, from the viewpoint of gasoline performance:

Thus, gasoline producers must provide gasolines that make possible the easy starting of engines and avoid vapor locking problems[10][11] while at the same time complying with the environmental regulatory limitations on hydrocarbon emissions.

When gasoline is combusted, any sulfur compounds in the gasoline are converted into gaseous sulfur dioxide emissions which are undesirable from the environmental viewpoint. Some of the sulfur dioxide also combines with the water vapor formed when gasoline combusts and the result is the formation of an acidic, corrosive gas that can damage the engine and its exhaust system. Furthermore, sulfur interferes with the efficiency of the on-board catalytic converters (discussed later in this article).

Thus, sulfur compounds in gasoline are highly undesirable from either the environmental viewpoint or the engine performance viewpoint.[3][12][13] Many countries now mandate that the sulfur content of gasoline be limited to 10 ppm by weight.

Gasoline stored in fuel tanks and other containers will, in time, undergo oxidative degradation and form sticky resins referred to as gums. Such gums can precipitate out of the gasoline and cause fouling of the various components of internal combustion engines which reduces the performance of the engines and also makes it harder to start them. Relatively small amounts of various anti-oxidation additives are included in end-product gasoline to improve the gasoline stability during storage by inhibiting the formation of gums. 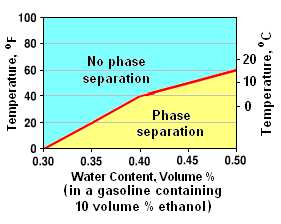 (PD) Image: Milton Beychok
Temperatures and associated water contents at which a blend of gasoline and 10 volume % ethanol separates.

Other additives are also provided in end-product gasolines, such as corrosion inhibitors to protect gasoline storage tanks, freezing point depressants to prevent icing, and color dyes for safety or governmental regulatory requirements.[1][3][10]

As discussed later in this article, many gasolines contain ethanol which is an alcohol with the formula C2H5OH. Gasoline is insoluble in water but ethanol and water are mutually soluble. Thus, end-product gasolines containing ethanol will, at certain temperatures and water concentrations, separate into a gasoline phase and an aqueous ethanol phase.[14]

For example, the adjacent graph shows that phase separation will occur in a gasoline, at temperatures of 5 to 16 °C (40 to 60 °F), containing 10 volume percent ethanol and as little as 0.40 to 0.50 volume percent water.

For the same temperature range, the fraction of water that an ethanol-containing gasoline can contain without phase separation increases with the percentage of ethanol. Thus, gasolines containing more than 10 volume percent ethanol will be less likely to experience phase separation.

In the United States

There is no "standard" composition or set of specifications for gasoline. In the United States, because of the complex national and individual state and local programs to improve air quality, as well as local refining and marketing decisions, petroleum refiners must supply fuels that meet many different standards. State and local air quality regulations involving gasoline overlap with national regulations and that leads to adjacent or nearby areas having significantly different gasoline specifications. According to a detailed study in 2006, [12] there were at least 18 different gasoline formulations required across the United States in 2002. Since many petroleum refiners in the United States produce three grades of fuel and the specifications for fuel marketed in the summer season vary significantly from the specifications in the winter season, that number may have been greatly understated. In any event, the number of fuel formulations has probably increased quite a bit since 2002. In the United States, the various fuel formulations are often referred to as "boutique fuels".[12][15][16] In general, most of the gasoline specifications meet the requirements of the so-called Reformulated Gasoline (RFG) mandated by federal law and implemented by the U.S. Environmental Protection Agency (U.S. EPA).

Some of the major properties and gasoline components focused upon by the various national and state or local regulatory programs are:

As of mid-2008, gasoline quality regulation in Canada is generally under provincial jurisdiction, except for some national jurisdiction over sulfur, benzene, lead, and the ability to require certain amounts of renewable fuels such as ethanol. Few provinces regulate many aspects of gasoline quality other than Reid vapor pressure. The exception to this is the province of Manitoba, which requires gasoline to comply with the voluntary national standard CGSB 3.5, Automotive Gasoline developed by the Canadian General Standards Board (CGSB), a component of Canada’s Department of Public Works and Government Services.[32]

The major details of the voluntary national standard CGSB 3.5, Automotive Gasoline are available in Appendix B of a report published in 2008.[32]

In Australia and New Zealand

The gasoline quality standards below apply only to the major cities and there are plans for lowering the maximum sulfur content from 150 ppmw to 50 ppmw in the near future. The standards for the rural areas of India are significantly less stringent.