This article is about Asphalt (petroleum). For other uses of the term Asphalt, please see Asphalt (disambiguation).

Petroleum asphalt is a sticky, black and highly viscous liquid or semi-solid that is present in most petroleum crude oils and in some natural deposits. Petroleum crude oil is a complex mixture of a great many different hydrocarbons. Petroleum asphalt is defined as that part of crude oil which is separated from the higher-boiling hydrocarbons in crude oil by precipitation upon the addition of lower-boiling hydrocarbon solvents such as propane, pentane, hexane or heptane. The precipitated material consists of asphaltenes which have an average molecular weight of about (800 - 2500 g/mole)[1][2] and exist in the form of flat sheets of polyaromatic condensed rings with short aliphatic chains.[3]

Over the years, petroleum asphalt has been referred to as bitumen, asphaltum or pitch. The terminology varies from country to country and from individual to individual. Asphalt is often confused with coal tar (or coal pitch) derived from the pyrolysis of coal and which has a different chemical structure than asphalt.

When petroleum asphalt is combined with construction aggregate (sand, gravel, crushed stone, etc.) for use in road construction or paving, it has often been referred to as asphaltic concrete, asphaltic cement, bituminous concrete, blacktop or road tar.

The natural deposits of asphalt (often referred to as tar) include asphaltic lakes such as Bermudez Lake in Venezuela, and Pitch Lake in Trinidad. Other natural deposits include oil sands (often called tar sands) and the two largest deposits of oil sands are such as in Alberta, Canada and the Orinoco Oil Belt area of Venezuela.

Europeans exploring the Americas discovered natural deposits of asphalt. Writing in 1595, Sir Walter Raleigh described a lake of asphalt on the island of Trinidad, near Venezuela. He used it to recaulk his ships.[5][6]

In the late 1700s and early 1800s, first Pierre-Marie-Jérôme Trésaguet of France, then Thomas Telford and subsequently John Loudon McAdam (both of Scotland) perfected the leveling, draining and construction of roads using layers of broken stones and gravel. In the period of 1860 – 1880, to reduce road dust and road maintenance, builders began using hot coal tar to bond the stones together. Such roads became named after McAdam and known as tarmacadam roads, later shortened to tarmac.[5][6][7][8]

By 1907, asphalt from petroleum refineries had outstripped the use of natural asphalt from Trinidad or elsewhere.[6]. Later in the 1900s, when natural gas replaced town gas, asphalt from petroleum refineries dominated the asphalt paving market from that point on. By the early 1990s, asphalt paving mixture producers in the United States used more than 50 × 106 barrels (7.95 × 106 cubic metres) of petroleum asphalt per year. Of the 2.27 × 106 miles (3.65 × 106 kilometers) of paved road in the United States, 94 percent of them are surfaced with asphalt, including 65 percent of the interstate system. [9] 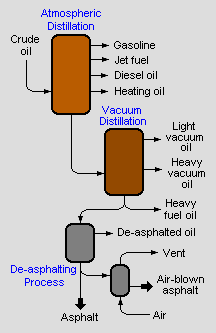 As mentioned earlier above, petroleum crude oil is essentially a complex mixture of a great many hydrocarbons. There are a great many different crude oil sources and each of the crude oils from those sources has its own unique mixture of hydrocarbons. Upon being fed into a petroleum refinery, the crude oil is initially distilled (i.e., boiled) to remove and recover various products such as naphtha which is subsequently further refined to produce gasoline (petrol), jet fuel, diesel oil, fuel oil and so-called vacuum oils which may also be further refined to produce more gasoline.[4][10][11][12]

The initial distillation of the petroleum crude oil is done in two steps as shown in the adjacent diagram:

The residual bottoms product from the atmospheric distillation is referred to as atmospheric resid or atmospheric residuum. Similarly, the residual bottoms product from the vacuum distillation is referred to as vacuum resid or vacuum residuum. In some refineries that process very heavy crude oils (i.e., crude oil with a higher than average crude oil density), the atmospheric resid may be suitable for further processing to obtain a petroleum asphalt end-product. However, again as shown in the adjacent diagram, it is more generally the vacuum resid that is further processed to derive an end-product of petroleum asphalt.[4][10][11]

There are a number of de-asphalting processes. Perhaps the most common one is known as propane de-asphalting which uses supercritical propane (meaning the propane is at temperature and pressure conditions above its critical point) as a solvent to extract and separate the lower-boiling, lower-density hydrocarbon oil molecules from the asphaltene molecules. The extraction occurs in a vertical tower operating at an absolute pressure of about 500 psi (34 atmospheres), a bottom temperature of 105 °F (40 °C) and a top temperature of 140 °F (60 °C). The propane enters the extraction tower at the bottom and travels upward counter-current to the asphalt that enters the tower at the top and flows downward.

The propane solvent in the separated deasphalted oil from the top of the extraction tower is stripped out and recycled for re-use in the extraction tower. The solvent-free, deasphalted oil may then be used as a feedstock component in other petroleum refinery processes such as a fluid catalytic cracker or a hydrocracker to produce a gasoline blending component.[4][10][11][13]

Solvent in the asphalt stream from the bottom of the extraction tower is also stripped from the asphalt stream and recycled for re-use. The solvent-free asphalt may then be marketed as end-product petroleum asphalt. Alternatively, all or some of the asphalt product from the de-asphalter may be processed in an air-blowing process to produce what is known as air-blown or oxidized asphalt.[4][10][11][13]

The air-blown product asphalt has a higher temperature softening point than asphalt which has not been air-blown and that is a desirable property for certain uses of petroleum asphalt.[4][10][11][13]

The end-product petroleum asphalt is typically maintained at a temperature of about 150 °C during storage at the petroleum refinery as well as during transportation to the asphalt end-users.

There are a number of physical properties that are important to the end-users of petroleum asphalt, including:[14] 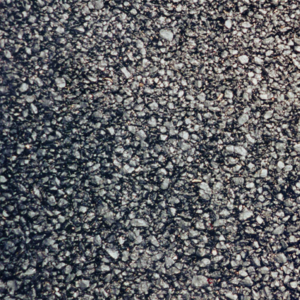 The largest use of petroleum asphalt is for making asphaltic concrete for road construction and accounts for approximately 80% of the petroleum asphalt consumed in the United States. The asphalt is used as the binder or glue that holds together the aggregate of sand, gravel, crushed stone, slag or other material.

There are various mixtures of asphalt with other materials that are used in road construction and other paving applications:

Only rarely, if ever, are air-blown asphalts used in asphalt-aggregate mixtures for paving purposes.[15]

Asphalt roofing shingles are the dominant roofing material in the United States, representing more than three-fifths of the total installed shingle.[16] They are a very economical roofing choice, especially so for house with sloping roofs.[17]

There are two basic types of asphalt shingles, those with an organic base and those with a fiberglass base:[18]

In hot climate areas, the amount of sunlight reflectance provided by the shingles is an important property in evaluating the performance of a specific brand of shingle. Reflectance is provide by the embedded granules and by colored shingle coatings.[17][19]

According to the U.S. Census Bureau, asphalt shingles accounted for more than half of the residential roofing market during the early 2000s.[20]

There are three large natural deposits of asphalt (or bitumen) in Alberta, Canada that are known as the Athabasca oil sands and their total surface area is about 54,000 square miles (141,000 square kilometres).[22] The oil sands consist of about 83% sand, 3% clay, 4% water and 10% asphalt.

On average, upgrading of about 1.16 barrels of asphalt is required to produce 1 barrel of syncrude.[24][25] The synthetic crude oil is subsequently transported to conventional petroleum refineries for processing.