This article is about Asphalt (paving). For other uses of the term Asphalt, please see Asphalt (disambiguation). 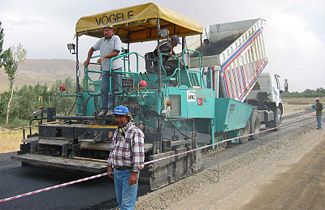 Paving asphalt is a mix of petroleum asphalt (commonly referred to as bitumen), aggregate and additives that is very commonly used as a top layer of pavement for roads. A typical paving asphalt consists to 90 to 95 percent by weight of aggregate and 5 to 10 % of bitumen.

Europeans exploring the Americas discovered natural deposits of petroleum asphalt. Writing in 1595, Sir Walter Raleigh described a lake of asphalt on the island of Trinidad, near Venezuela. He used it to recaulk his ships.[2][3]

In the late 1700s and early 1800s, first Pierre-Marie-Jérôme Trésaguet of France, then Thomas Telford and subsequently John Loudon McAdam (both of Scotland) perfected the leveling, draining and construction of roads using layers of broken stones and gravel. In the period of 1860 – 1880, to reduce road dust and road maintenance, builders began using hot coal tar to bond the stones together. Such roads became named after McAdam and known as tarmacadam roads, later shortened to tarmac.[2][3][4][5]

Paving asphalt is water repellant due to the bitumen which is part of the asphalt mix.

The physical properties are dependent on the temperature of the material. At high temperatures, paving asphalt has a very distinctive viscous behavior. As the paving asphalt cools, it will solidify into a nearly-rigid solid, though some flexibility is retained at ordinary outdoor temperatures.

As the physical properties are mainly dependent on the aggregates used, they can vary over a large range. Typical values are:

Use in road construction 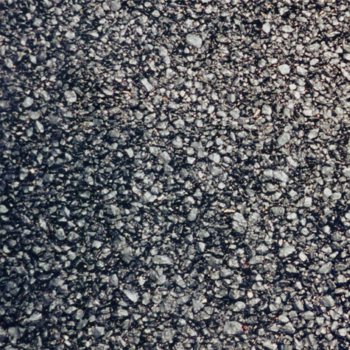 There are various mixtures of asphalt with other materials that are used in road construction and other paving applications:

The preparation of paving asphalt mixtures is done in several steps: