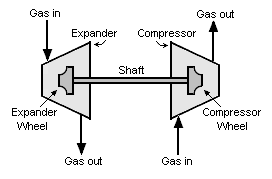 An expansion turbine, also referred to as a turboexpander or turbo-expander, is a centrifugal or axial flow turbine through which a high pressure gas is expanded to produce work that is often used to drive a compressor.[1][2][3]

Because work is extracted from the expanding high pressure gas, the expansion is an isentropic process (i.e., a constant entropy process) and the low pressure exhaust gas from the turbine is at a very low temperature, sometimes as low as −90 °C or less.

Expansion turbines are very widely used as sources of refrigeration in industrial processes such as the extraction of ethane and natural gas liquids (NGLs) from natural gas,[4] the liquefaction of gases (such as oxygen, nitrogen, helium, argon and krypton)[5][6] and other low-temperature processes. 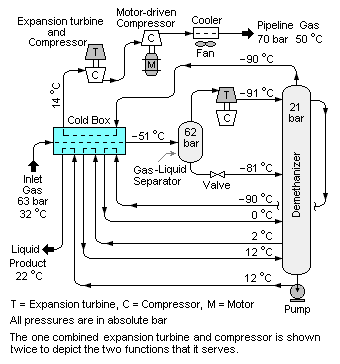 When processed into finished by-products (see Natural gas processing), these heavier hydrocarbons are collectively referred to as NGL (natural gas liquids). The extraction of the NGL often involves an expansion turbine[7] and a low-temperature distillation column (called a demethanizer) as shown in Figure 2. The inlet gas to the demethanizer is first cooled to about −51 °C in a heat exchanger (referred to as a cold box) which partially condenses the inlet gas. The resultant gas-liquid mixture is then separated into a gas stream and a liquid stream.

The liquid stream from the gas-liquid separator flows through a valve and undergoes a throttling expansion from an absolute pressure of 62 bar to 21 bar (6.2 to 2.1 MPa) , which is an enthalpic process (i.e., a constant enthalpy process) that results in lowering the temperature of the stream from about −51 °C to about −81 °C as the stream enters the demethanizer.

The gas stream from the gas-liquid separator enters the expansion turbine where it undergoes an isentropic expansion from an absolute pressure of 62 bar to 21 bar (6.2 to 2.1 MPa) that lowers the gas stream temperature from about −51 °C to about −91 °C as it enters the demethanizer to serve as distillation reflux.

The overhead gas product from the demethanizer at about −90 °C is processed natural gas that is of suitable quality for distribution to end-use consumers by pipeline. It is routed through the cold box where it is warmed as it cools the inlet gas. It is then compressed in the gas compressor which is driven by the expansion turbine and further compressed in a second-stage gas compressor driven by an electrical motor before entering the distribution pipeline.

The bottom product from the demethanizer is also warmed in the cold box, as it cools the inlet gas, before it leaves the system as NGL. 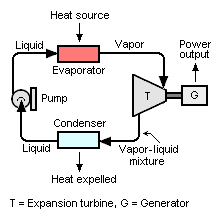 Figure 3 depicts a electric power generation system that uses a heat source, a cooling medium (air, water or other), a circulating working fluid and an expansion turbine. The system can accommodate a wide variety of heat sources such as:

Referring to Figure 3, the circulating working fluid (usually an organic compound such as R-134a) is pumped to a high pressure and then vaporized in the evaporator by heat exchange with the available heat source. The resulting high-pressure vapor flows to the expansion turbine where it undergoes an isentropic expansion and exits as a vapor-liquid mixture which is then condensed into a liquid by heat exchange with the available cooling medium. The condensed liquid is pumped back to the evaporator to complete the cycle.

The system in Figure 3 is a Rankine cycle as is used in fossil fuel power plants where water is the working fluid and the heat source is derived from the combustion of natural gas, fuel oil or coal used to generate high-pressure steam. The high-pressure steam then undergoes an isentropic expansion in a conventional steam turbine. The steam turbine exhaust steam is next condensed into liquid water which is then pumped back to the steam generator to complete the cycle.

When an organic working fluid such as R-134a is used in the Rankine cycle, the cycle is sometimes referred to as an Organic Rankine Cycle (ORC). [8][9][10] 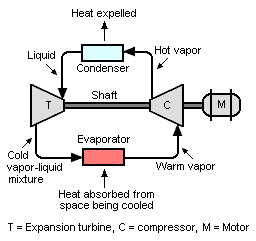 Figure 4 depicts a refrigeration system with a capacity of about 100 to 1000 tons of refrigeration (i.e., 352 to 3,520 kW). The system utilizes a compressor, an expansion turbine and an electric motor.

Depending on the operating conditions, the expansion turbine reduces the load on the electric motor by some 6 to 15% as compared to a conventional vapor-compression refrigeration system that uses a throttling expansion valve rather than an expansion turbine.[11]

The system employs a high-pressure refrigerant (i.e., one with a low normal boiling point) such as:[11]

As shown in Figure 4, refrigerant vapor is compressed to a higher pressure resulting in a higher temperature as well. The hot, compressed vapor is then condensed into a liquid. The condenser is where heat is expelled from the circulating refrigerant and is carried away by whatever cooling medium is used in the condenser (air, water, etc.).

As shown in Figure 4, refrigerant vapor is compressed to a higher pressure resulting in a higher temperature as well. The hot, compressed vapor is then condensed into a liquid. The condenser is where heat is expelled from the circulating refrigerant and is carried away by whatever cooling medium is used in the condenser (air, water, etc.). 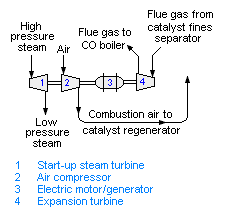 The combustion flue gas from the catalyst regenerator of a fluid catalytic cracker is at a temperature of about 715 °C and at a pressure of about 2.4 barg (240 kPa gauge). Its gaseous components are mostly carbon monoxide (CO), carbon dioxide (CO2) and nitrogen (N2). Although the flue gas has been through two stages of cyclones (located within the regenerator) to remove entrained catalyst fines, it still contains some residual catalyst fines.

Figure 5 depicts how power is recovered and utilized by routing the regenerator flue gas through an expansion turbine. After the flue gas exits the regenerator, it is routed through a secondary catalyst separator containing swirl tubes designed to remove 70 to 90 percent of the residual catalyst fines.[12] This is required to prevent erosion damage to the expansion turbine.

The expanded flue gas is then routed through a steam-generating boiler (referred to as a CO boiler) where the carbon monoxide in the flue gas is burned as fuel to provide steam for use in the refinery.[13]

The flue gas from the CO boiler is processed through an electrostatic precipitator (ESP) to remove residual particulate matter. The ESP removes particulates in the size range of 2 to 20 microns (i.e., micrometres) from the flue gas.[13]

The possible use of an expansion machine for isentropically creating low temperatures was suggested by Carl Wilhelm Siemens, a German engineer in 1857. About three decades later, in 1885, Ernest Solvay of Belgium attempted to use a reciprocating expander machine but could not attain any temperatures lower than –98 °C because of problems with lubrication of the machine at such temperatures.[2]

In 1902, Georges Claude, a French engineer, successfully used a reciprocating expansion machine to liquefy air. He used a degreased, burnt leather packing as a piston seal without any lubrication. With an air pressure of only 40 bar (4 Mpa), Claude achieved an almost isentropic expansion resulting in a lower temperature than had before been possible.[2]

The first expansion turbines seem to have been designed in about 1934 or 1935 by Guido Zerkowitz, an Italian engineer working for the German firm of Linde AG.[14][15]

In 1939, the Russian physicist Pyotr Kapitsa perfected the design of centrifugal expansion turbines. His first practical prototype was made of Monel metal, had an outside diameter of only 8 cm (3.15 inches), operated at 40,000 revolutions per minute and expanded 1,000 cubic metres of air per hour. It used a water pump as a brake and had an efficiency of 79 to 83 percent.[2][15] Most expansion turbines in industrial use since then have been based on Kapitsa's design and centrifugal expansion turbines have taken over almost 100 percent of the industrial gas liquefaction and low temperature process requirements.[2][15]

In 1978, Pyotr Kapitsa was awarded a Nobel physics prize for his body of work in the area of low-temperature physics.[16]