This article is about Reflux (distillation}. For other uses of the term Reflux, please see Reflux (disambiguation). 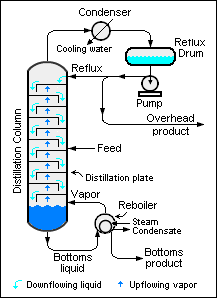 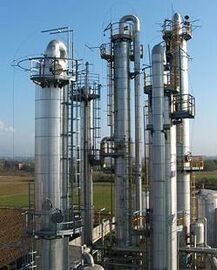 It is also used in laboratories to supply heat to reactions over a long period of time.

The use of reflux[1][2][3] is widely practiced in industries that utilize large-scale distillation columns such as petroleum refineries, petrochemical and chemical plants, and natural gas processing plants.

Inside the column, the downflowing reflux liquid provides cooling and condensation of the upflowing vapors thereby increasing the efficacy of the distillation column. The more reflux is provided for a given number of distillation plates, the better is the column's separation of lower boiling materials from higher boiling materials. Conversely, for a given desired separation, the more reflux is provided, the fewer distillation plates are required.

A reboiler at the bottom of the distillation column provides the heat needed to generate the upflowing vapors inside the column. The reboiler may be a heat exchanger (as shown in the adjacent diagram) or a fired heater.

By controlling the temperature at the condenser's outlet product, a reflux still may be used to ensure that higher boiling point components are returned to the still while lighter elements are routed to a secondary condenser. This is useful in producing high-quality alcoholic beverages, while ensuring that less desirable components (such as fusel alcohols) are returned to the still. For high-quality beverages (such as vodka), or post-distillation flavored beverages, multiple distillations or charcoal filtering may be used to obtain the final products. 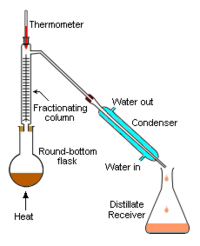 The apparatus shown in Figure 3 represents a batch distillation as opposed to a continuous distillation. The liquid feed mixture to be distilled is placed into the round-bottomed flask along with a few anti-bumping granules, and a fractionating column is fitted into the top. As the mixture is heated and boils, vapor rises up the column. Some of the vapor cools and condenses on the glass platforms (known as plates or trays) inside the column and runs back down into the liquid below, thereby refluxing the upflowing distillate vapor.

The hottest tray is at the bottom of the column and the coolest tray is at the top. At steady state conditions, the vapor and liquid on each tray is at equilibrium. Only the most volatile of the vapors stays in gaseous form all the way to the top. The vapor at the top of the column then passes into the water-cooled condenser, where it condenses into a liquid. The process continues until all of the most volatile components in the liquid feed boil out of the mixture. 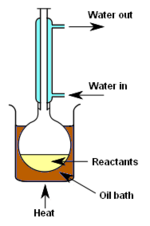 Figure 4 depicts a laboratory apparatus setup for supplying heat to a chemical reaction. A liquid reaction mixture is placed in a flask connected to a water-cooled vertical condenser, such that any vapors given off are condensed to a liquid, and drop back into the reaction vessel. In other words, the depicted setup provides total reflux.

The flask is heated for the entire course of the reaction and the purpose is to thermally accelerate the reaction by conducting it at an elevated temperature.

The advantage of this technique is that it can be left for a long period of time without fear of the reaction vessel boiling dry since any evolved vapor is condensed and returned to the reaction flask. The constant boiling action also serves to continuously mix the liquid reactant mixture, although a magnetic stirring rod mechanism is often used to achieve a uniform solution.

As shown in the diagram, the reaction flask is placed inside an oil bath. A thermally stable bath of silicone oil is generally used rather than water which evaporates too readily to be useful for lengthy reactions. Using an oil bath also allows higher temperatures to be achieved than could be done with a water bath. If even higher temperatures are required, the oil bath can be replaced with a sand bath.