This article is about Acid dew point. For other uses of the term Dew point, please see Dew point (disambiguation).

The acid dew point (also acid dewpoint) of a flue gas (i.e., a combustion product gas) is the temperature, at a given pressure, at which any gaseous acid in the flue gas will start to condense into liquid acid.[1][2][3]

The acid dew point of a flue gas, at a given pressure, is often referred to as the point at which the flue gas is "saturated" with gaseous acid, meaning that the flue gas cannot hold any more gaseous acid.

In many industrial combustion processes, the flue gas is cooled by the recovery of heat from the hot flue gases before they are emitted to the atmosphere from the final flue gas stack (commonly referred to as a chimney). It is very important not to cool the flue gas below its acid dew point because the resulting liquid acid condensed from the flue gas can cause serious corrosion problems for the equipment used in transporting, cooling and emitting the flue gas.

As a broad generality, flue gases from the combustion of coal, fuel oil, natural gas, or biomass are primarily composed of gaseous carbon dioxide (CO2) and water vapor (H2O) as well as gaseous nitrogen (N2) and excess oxygen (O2) remaining from the intake combustion air. Typically, more than two-thirds of the flue gas is nitrogen. The combustion flue gases may also contain small amounts of particulate matter, carbon monoxide, nitrogen oxides, and sulfur oxides in the form of gaseous sulfur dioxide (SO2) and gaseous sulfur trioxide (SO3). The SO3 is present because a portion of the SO2 formed in the combustion of the sulfur (S) compounds in the combustion fuel is further oxidized to SO3. The gas phase SO3 then combines the vapor phase H2O to form gas phase sulfuric acid H2SO4: 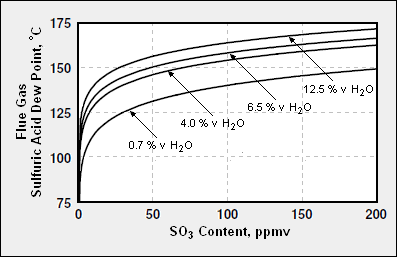 Given a flue gas composition, its acid dew point can be predicted fairly closely. As an approximation, the sulfuric acid dew points of flue gases from the combustion of fuels in thermal power plants range from about 120 °C to about 150 °C (250 to 300 °F).

Some of the sulfur dioxide in flue gases will also combine with water vapor in the flue gases and form gas phase sulfurous acid (H2SO3):

These equations can be used to predict the acid dew points of the four acids that most commonly occur in typical combustion product flue gases:

Compared with published measured data, the acid dew points predicted with equations 3, 4 and 5 are said to be within 6 kelvins, and within 9 kelvins for equations 1 and 2.[2]