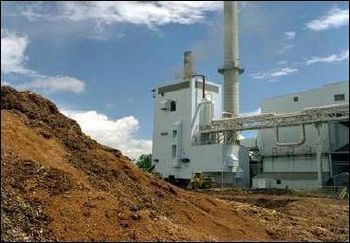 Biomass, a source of renewable energy, is biological material such as wood, wood waste, municipal solid waste, straw, sugar cane, algae, and many other byproducts derived from agricultural and forestry production as well as other sources. Since biomass derives from plants generated by solar energy in the photosynthesis process, it can also be defined as the biological material on Earth that has stored solar energy in the chemical bonds of the organic material.

The fossil fuels (coal, petroleum and natural gas) are currently thought to have been formed from prehistoric, ancient biomass buried deeply underground over millions of years of geological time. Therefore, they are not considered to be renewable sources of energy.

Production of fuels and other products from biomass

The direct combustion of biomass for producing heat and electric power provides a ready disposal mechanism for municipal, agricultural, and industrial organic wastes. In 2009, about 11,350 megawatts (MW) of electric power, amounting to 1.1% of the summertime electrical supply in the United States was generated by burning biomass that included: wood, wood waste, municipal solid waste (MSW), landfill gas, and agricultural byproducts and waste.[1]

The New Hope Power Partnership in Florida is the largest biomass power plant in North America. It generates 140 MW of power using uses sugar cane fiber (bagasse) and recycled wood as fuel.[2] It has been in operation for more than 10 years. 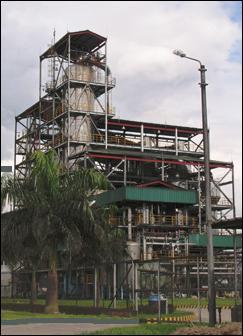 There are several processes available for converting the chemical energy contained in biomass into liquid automotive transport fuels such as biodiesel and ethanol.[4] 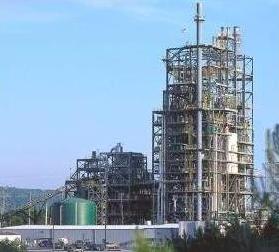 Ethanol fuel is ethyl alcohol (C2H5OH) and it is most often used as an automotive motor fuel, mainly as an additive for gasoline. Ethanol can be produced by fermentation of sugar cane, bagasse, sugar beets, barley, potatoes, corn and many other grains as well as many agricultural byproducts and wastes.

Ethanol fuel is widely used in Brazil and in the United States, and together both countries were responsible for about 86 percent of the world's ethanol fuel production in 2009.[7]

Biodiesel refers to a diesel fuel produced by chemically reacting lipids such as vegetable oils or animal fats with an alcohol such as methyl alcohol (CH3OH). The resulting biodiesel consists of esters of long-chain fatty acids. The process is known as "transesterification" and it may be carried out by several methods: the common batch process, supercritical processes and ultrasonic methods.

Gasification is a process that reacts carbon-containing materials (such as coal or biomass) at high temperatures with reagent gases (namely, steam, pure oxygen and/or air) to produce a mixture of carbon monoxide (CO) and hydrogen (H2) commonly called syngas (a contraction of synthesis gas). It has been in use since the early 1800s when coal and peat were gasified to produce what was then called town gas for lighting and cooking ... later to be replace by electricity and natural gas. As of 2010, 412 modern industrial-scale gasifiers were in operation in 29 countries worldwide (see adjacent table).[9]

The syngas may be directly burned as a fuel, converted into methyl alcohol or hydrogen, subjected to methanation to produce synthetic natural gas (SNG),[10] or converted into synthetic liquid hydrocarbons via the Fischer-Tropsch process.

The vessel in which the gasification process takes place is called a gasifier. There are various types of gasifiers in current use,[9][11] including: 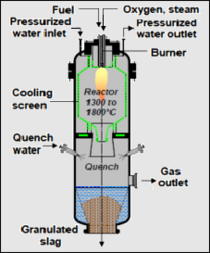 It is difficult to state exactly what chemical reactions occur during gasification. However, most researchers have reached agreement on the primary reactions and the syngas composition ranges shown just below:[9][12] 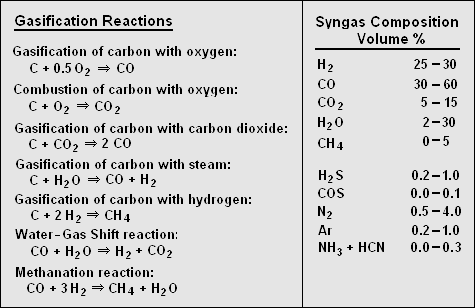 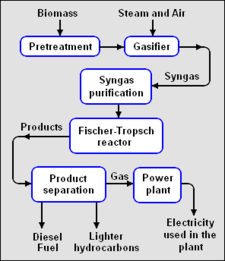 Fischer-Tropsch synthesis is a catalytic chemical process developed in the 1920s to convert a mixture of carbon monoxide and hydrogen (i.e., syngas), into hydrocarbon molecular chains of varying lengths.

The process was invented by Franz Fischer and Hans Tropsch working in Germany's Kaiser Wilhelm Institute (today the Max Planck Institute) in the 1920's. It was first commercialized in Germany in 1936 and it was used extensively by Germany during World War II to produce synthetic fuels. Later, facing isolation and embargoes during the apartheid era (1948 - 1990), South Africa turned to coal gasification and the Fischer-Tropsch process to supply significant quantities of its hydrocarbon fuel needs. Since that time, the process has been extensively improved and refined.[19][20]

The process is relatively simple: syngas is fed at high temperatures through catalysts (usually the transition metals cobalt or iron) which facilitate the hydrocarbon formation. When paired with syngas from the gasification of fossil fuels or biomass, the Fischer-Tropsch process is a method of converting any available carbon source into hydrocarbon liquids consisting of molecules having from 5 to 20 carbon atoms in accordance with the following equation for the formation of alkanes (CnH2n+2), which are the primary hydrocarbons formed:[19][21]

Lesser amounts of alkenes (CnH2n) and alcohols (CnH2n+1OH) are formed in accordance with these equations:[21]

There are a good many different reactor designs for the Fischer-Tropsch process as well as different operating conditions. There are two general process temperature ranges:[21][22]