This article is about Water dew point. For other uses of the term Dew point, please see Dew point (disambiguation).

Determination of the water dew point of any gas mixture 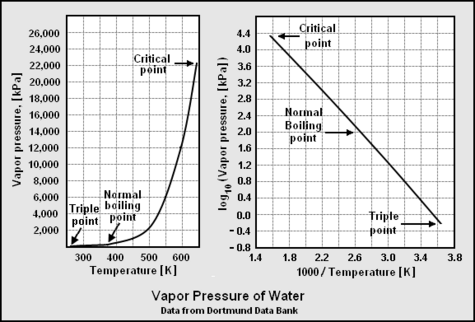 Given the total pressure of the gas (

) and either the mole fraction (

) in the gas mixture can be readily determined with the above equation.[1]

When the partial pressure of water vapor (

), the gas mixture is saturated with water and is at its water dew point (

) to the temperature of the water. One such equation, which is quite accurate, is:

The temperature-explicit equation (2) can be transformed into this pressure-explicit form:

In both equations 2 and 3, pressures are in kiloPascal (kPa) and temperatures are in kelvins (K).

Using equation (2), we can determine the water dew point temperature (

) for various values of

and then compare them to values obtained from a set of steam tables:[1][2]

It is also important in the processing and pipelining of natural gas for the same reason, namely to prevent or reduce corrosion problems. At certain temperatures, condensation of water vapor present in natural gas pipelines may form methane hydrates (also known as clathrates, which can plug the pipelines.