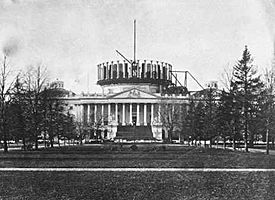 The apportionment of seats in this House of Representatives was based on the Seventh Census of the United States in 1850. The Senate had a Democratic majority, and the House had a Republican plurality.

Kansas was newly admitted to the Union and first represented as a state in this Congress. South Carolina, Mississippi, Alabama, Florida, Louisiana, Georgia, and Texas declared their secession from the Union during this Congress and withdrew their representatives.

In this session, the Republican party had its first plurality in the House, but was four members short of a majority; until Southern Democrats began withdrawing near the end of the term. The count below identifies party affiliations at the beginning of the first session of this Congress, and includes members from vacancies and newly admitted states, when they were first seated. Changes resulting from subsequent replacements are shown below in the "Changes in membership" section.

List of United States federal legislation in the 36th Congress

This list is arranged by chamber, then by state. Senators are listed in order of seniority, and Representatives are listed by district.

The names of members of the House of Representatives elected statewide on the general ticket or otherwise at-large, are preceded by an "A/L," and the names of those elected from districts, whether plural or single member, are preceded by their district numbers.

Many of the congressional district numbers are linked to articles describing the district itself. Since the boundaries of the districts have changed often and substantially, the linked article may only describe the district as it exists today, and not as it was at the time of this Congress.

The list below is arranged by chamber, then by political party. Members are shown in alphabetical order.

Senators were elected by the state legislatures every two years, with one-third beginning new six year terms with each Congress.

Members of the House of Representatives were elected by popular vote, variously to single member districts or at-large.

The count below reflects changes from the beginning of the first session of this Congress.