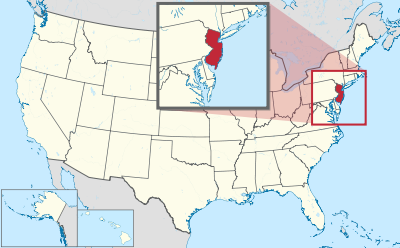 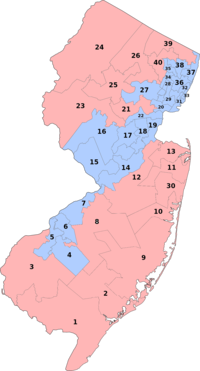 New Jersey is a state on the eastern coast of the United States of America. It is bordered on the south by Delaware (mostly across the Delaware Bay); on the west by Pennsylvania; on the north by New York state; and on the east by the Atlantic Ocean. The state capital is Trenton, New Jersey. Broadcast media in the state is typically sourced from two nearby large cities, New York City, or Philadelphia, Pennsylvania, which affects political advertising and awareness. The more densely urban areas in a belt across the center of the state tend to vote Democrat, and the more suburban and rural areas tend to vote Republican. The state has recently had governors from both parties. The two senators have been Democrats in recent decades, and most (but not all) of the U.S. congressional representatives as well.

New Jersey ratified the U.S. Constitution on 18 December 1787, the third state to do so. New Jersey's state motto is "The Garden State", and despite dense suburban sprawl, it still has numerous farms and wooded lands. According to the 2020 US Census Bureau, New Jersey has a population of 8.882 million, with an average of 1,134.5 people per square mile.[1], making it the most densely populated state in the United States. By comparison, Montana only has an average of just 6.86 people per square mile.

As of 2022, all aspects of reproductive choice including abortion are protected by law.[2]

There are strict gun registration laws (no open carry).

Due to past industrial activity, New Jersey has had more Superfund toxic waste sites than any other state in the union--and this despite it's small geographic size. Fewer than a quarter of New Jersey’s Superfund sites--35 out of about 150 that have been on the EPA’s list at various times since the law was passed in 1980--have actually been cleaned up.

In 2022, the Sales Tax rate was 6.625%. It is a "progressive" sales tax, in that certain items are exempt from sales tax, such as food, clothing, drugs, and manufacturing machinery. Also, certain specially designated Urban Enterprise Zones have their rate cut in half (in 2022, these zones existed in parts of Elizabeth, Bridgeton, Camden, Newark, Trenton, Plainfield, New Brunswick and Gloucester City).

Residential land is scarce, and property taxes tend to be high relative to other parts of the United States.

About a third of adults in the state identify as Catholic, another third as Christian, and the remaining third divided between various world religions on the one hand and agnostic/atheistic leanings on the other hand[3].