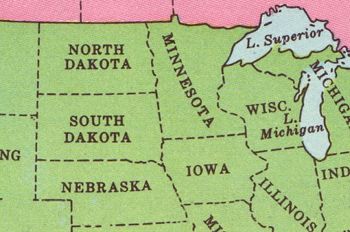 Minnesota is a state located in the Midwestern United States, and became the 32nd state on May 11, 1858. It has five million residents, sixty percent of whom live in the Twin Cities of Minneapolis and Saint Paul, the latter being the state capital. The Twin Cities is the 13th largest metropolitan area in the United States. The state is often nicknamed the "North Star State", and borders Wisconsin, North Dakota, South Dakota, Iowa and the Canadian provinces of Manitoba and Ontario. It is served by three major interstate highways: I-35, I-90 and I-94.

It is a state with a large medical industry, with the Mayo Clinic in Rochester and companies like Medtronic headquartered in the state. Other large companies from Minnesota are retail giant Target, electronics company Best Buy, and the chemical corporation 3M.