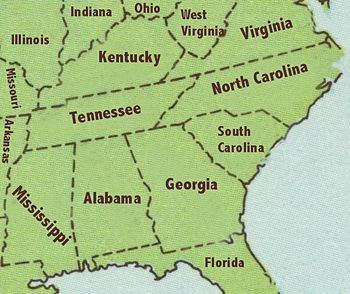 Tennessee is a state of the upper south in the United States. Its major cities are Memphis, Nashville (the state capital), Knoxville, and Chattanooga. Tennessee was given its own statehood within the United States in 1792; prior to that, it had been considered a western extension of the Carolinas. The state is crossed twice by the Tennessee River.

Several Native American tribes occupied the area that would become Tennessee. The most prominent were the Cherokee in the east, the Chickasaw in the west, and the Shawnee and Yuchi in the middle region. The first Europeans to visit Tennessee probably were Spaniards, members of the expeditions of Hernando de Soto (1539-1544) and Juan Pardo (1566-1567). The Spanish built several small forts, but they did not colonize the area.

King Charles II of England included the Tennessee country in the Carolina grants of 1663 and 1665. The first Englishmen to visit the region came to East Tennessee in 1673. In the same year two Frenchmen, Jacques Marquette and Louis Jolliet, landed at the site of Memphis while on a voyage down the Mississippi River. In 1682, another French expedition, under Robert Cavelier, sieur de la Salle, built Fort Prud'homme at the mouth of the Hatchie River in what is now West Tennessee. This rivalry between the British and the French reached a climax in the French and Indian War, which ended in British victory and the withdrawal of the French.

American scouts, notably Daniel Boone, began exploring Tennessee looking for farmland; their first permanent settlement began about 1769. The settlers, coming mainly from the back country of Virginia and North Carolina, were dissatisfied with corrupt and oppressive features of the colonial governments; they were motivated by land hunger and a restless spirit. By 1772, there were four areas of American settlement: one between the forks of the Holston River, near Bristol; another along the Watauga River, in the vicinity of Elizabethton; a third west of the Holston River, near Rogersville; and a fourth along the Nolichucky River, near the present Erwin.

Only the settlement north of the Holston was on land legally ceded by Indians; this area was governed by Virginia until 1779. The other settlers, who were on Indian land, set up their own government, called the Watauga Association, at first leasing the land from the Cherokees and finally purchasing it under the Treaty of Sycamore Shoals in 1775. Under the same treaty, the North Carolina jurist Richard Henderson and his Transylvania Company purchased an immense tract of land in Kentucky and Middle Tennessee from the Cherokees. After Virginia nullified the company's title to Kentucky, Henderson and his associates sponsored the settlement of the Cumberland Valley in the vicinity of Nashville in 1779-1780.