Virginia is a state in the southeastern United States. It was named in honor of the "virgin queen" of England, Queen Elizabeth I, and was nicknamed the Old Dominion by King Charles II because Virginia remained loyal to the crown during the English Civil War and throughout Cromwell's years. Formally known as the Commonwealth of Virginia, this state was one of the first colonies in North America in the 1600s and joined the United States of America with the 1776 Declaration of Independence, written by native son Thomas Jefferson. The current governor of Virginia is Bob McDonnell, a member of the U.S. Republican Party. 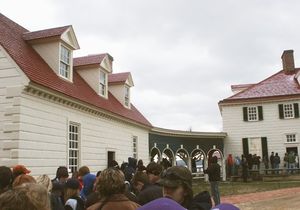 Virginia is often called the Mother of Presidents or Birthplace of Presidents because eight U.S. Presidents have been born in Virginia. Four of the first five presidents, George Washington, Thomas Jefferson, James Madison, and James Monroe, were Virginians. The remaining Presidents from Virginia are William Henry Harrison, John Tyler, Zachary Taylor, and Woodrow Wilson. Many of their Virginia homes such as Monticello and Mount Vernon are popular tourist destinations.[1]

Virginia is commonly divided into five geological regions, Tidewater, Piedmont, Blue Ridge, Valley and Ridge and the Applachia Plateau. There are no formal lines demarking these regions and any political boundaries, such as county or city boundaries are coincidental. However, these regions have identifiable geology which differentiates them.

Because of this the C&O Canal (Chesapeake and Ohio Canal) was constructed above the Fall Line. The goal was to unite the Chesapeake Bay with the Ohio River system the way the Erie Canal had opened up the Great Lakes below Niagara. Many important Virginia cities such as Alexandria, Richmond and Petersburg are just below the Fall Line.

The Tidewater or "Coastal Plain" of Virginia is bounded on the east by the Atlantic Ocean and on the west by the Fall Line. Geologically the area is a drowned coastline where a recent rise in ocean level has created many estuaries with abundant harbors.

The Tidewater Region was the first region of Virginia to be settled by Europeans, and is home to many of the oldest English settlements in North America, such as Jamestown. The dominant geographical feature of the region is the Chesapeake Bay. Rivers in the region rise and fall with the tides because they flow into the Chesapeake or other salt-water bays. Major ports such as Norfolk or Newport News are found in the region as are historical port cities such as the tobacco ports of Alexandria and Yorktown are found on the Coastal Plain. The British surrender at Yorktown was considered a tipping point in the Revolutionary War.

The Eastern Shore of Virginia is that part of Virginia situated on the Delmarva Peninsula between the Chesapeake Bay and the Atlantic Ocean. The region is fairly undeveloped due to the remoteness imposed by the bay and ocean, but many fishers, farmers and chicken farms are found here. These region is geographically part of the Tidewater region and it's connected to the mainland by way of the Chesapeake Bay Bridge Tunnel. [2]

Above the Fall Line are the foothills of the Applachian and the region whose name means "foot mountain". The Piedmont is rockier and higher than the coastal plain of the Tidewater. The Piedmont was settled by English pioneers in the earliest days of colonial America and later by African slaves who worked the plantations of the region. Tobacco and corn are still an important part of the Piedmont economy. Scenic and historic cities such as Charlottesville and Lynchburg are two important Piedmont cities. The famed Appomattox courthouse is in the Piedmont.

The Blue Ridge is a range of mountains rise up above the Piedmont and mark the point where the Applachian Mountains rise up above the Piedmont. The Shenandoah National Park and the Skyline Drive are Blue Ridge tourist destinations. Apples orchards are common in this region, but the industry is not as vibrant as it was historically. [| White House Foods], a major apple juicer and product packager, draws many of its apples from this region. Cities are uncommon, perhaps unknown in this region, but "mountain people" inhabited much of the highlands before they were converted to parks. Mountain people, sometimes called hill-billies, had a unique culture devoted to life in the highland. [3][4]

Beyond the Blue Ridge is the Valley and Ridge Region. Perhaps the most famous part of the Valley and Ridge Region west of the Blue Ridge is the Shenandoah Valley. Stonewall Jackson's Valley campaign was fought throughout this region. Cities in this region developed in proximity to the early railroad system, and this figured into the strategy of the War Between the States. Manassas, Harrisonburg and Roanoke are important cities in this region.

The southwest corner of Virginia between West Virginia and Tennessee makes up Virginia's Appalachian Plateau. The region is similar geographically to West Virginia with rugged terrain not well-suited to the development of large cities. Coal mining is an important industry in this part of Virginia.

Map of counties in Virginia

Virginia has evolved into several different cultural regions which have very divergent economic interests, lifestyle goals and ways of life. Northern Virginia is one of the wealthiest, best educated and most developed parts of the United States and thus the entire world. Traffic congestion is a common problem and the Metro (subway system) aids commuters into and out of Washington D.C., Arlington and Alexandria. High technology industries and U.S. government jobs are leading employers in this region. Southwestern Virginia is mountainous with coal mining and few other industries. The Virginia Beach/Norfolk Region is home to several major military installations and ship-building foundries. Central Virginia is dominated by mid-sized cities with disproportionate political strength such as Richmond. The Chesapeake Bay separates the Eastern Shore of Virginia from the rest of Virginia. The Eastern Shore is the Virginia portion of the Delmarva Peninsula and is sparsely populated, flat and sandy.

Virginia is organized into a system of counties and independent cities. Towns are incorporated in counties, and towns have the power to levy taxes in addition to those imposed by the county. Arlington is organized as a county, but there are no towns in the county limits, and for all practical purposes, Arlington is a city.

In Virginia's executive branch, there are three statewide elective offices, governor, lieutenant governor and attorney general. A governor cannot succeed himself, although there have been individuals elected to nonconsecutive terms, such as Doug Wilder. Elections take place every four years, in an odd-numbered year.

While the state runs to the conservative and Republican, gubernatorial elections may go in either direction. The incumbent, Bob McDonnell, is a Republican; he had previously been the attorney general. His predecessor, Tim Kaine, is now chairman of the Democratic National Committee. The lieutenant governor is Bill Bolling (R), and the Attorney General is Ken Cuccinelli II (R).

Governors and lieutenant governors are independently elected, not necessarily of the same party, and not necessarily cooperative. Kaine, however, worked closely with his predecessor, Democrat Mark Warner, who gave him strong support in the election.

Northern Virginia tends to be more liberal and Democratic than the rest of the state. Some Northern Virginia legislators, both state and Congressional, work across party lines. Republican Congressman Frank Wolf, for example, is a recognized human rights advocate.

The unofficial motto and tourist marketing slogan of the Commmonwealth is Virginia is for Lovers but the official State Motto is Sic Semper Tyrannis, a Latin phrase meaning "Thus Always to Tyrants". [5]

The front of the Great Seal of Virginia (called the obverse) features the Roman goddess Virtus standing over a defeated opponent. Virtus wears a blue tunic exposing her left breast. One arm rests on a spear, the other carries a sheathed sword. This goddess stands in a triumpant victor's with one foot on the chest of a fallen tyrant, whose crown lies at Virtus' feet. Sic Semper Tyrannis arches at the bottom the image and "Virginia" symmetrically arches above Virtus. [6] The reverse (or back side) of the Seal features the Latin word Perseverando (Persevering) and a depiction of three robed Roman goddesses figures who represent Libertas, Ceres and Aeternitas. Ceres, the goddess of agriculture, holds a horn of plenty with other symbols of agricultural bounty. In the center of the reverse, Libertas, the goddess of liberty, holds a wand at the top of which hangs a Phrygian Cap, also known as a Liberty Cap. To the right of Libertas is Aeternitas or "Eternity" holding an orb representing Virginia's authority. [7]

Virginia's flag features the Great Seal of the Commonwealth on white center over a field of royal blue. Many web images depict a light blue flag, but the actual flag is a rich purplish blue.

The cardinal and the dogwood petal are among Virginia's most well-known emblems, but Virginia's has many emblems:

Virginia is well served by the Interstate Highway System including at least two of the busiest highways on the Eastern Coast of the US, I-81 and I-95. Interstate 81 is popular with tractor-trailers, while 95 is a popular tourist highway. The famed Beltway (I-495) surrounds Washington DC by looping through Northern Virginia. Richmond is served by I-95 and a beltway looping off I-64.

Rail lines are not as busy as they were historically, but important coal lines still make their way through the Valley and Ridge Region of Virginia. Amtrak lines Richmond and Alexandria to the cities in the Eastern US.

Dulles International is one of the busiest airports in the US and the Northern Virginia area is also served by Ronald Reagan National Airport. Richmond has a substantial airport.

Norfolk Virginia is one of the largest ports on the East Coast. The Virginia Inland Port in Front Royal Virginia is linked by rail line to Norfolk.

There is a strong Federal presence in Virginia, beginning with the Pentagon Building in Arlington, and moving to the immense Naval Station Norfolk. Central Intelligence Agency headquarters are in Langley, and "the Farm", used for clandestine training and activities, is well understood to be the Camp Peary facility near Jamestown.

Fort Belvoir, in northern Virginia, hosts a wide range of military services. The Army's Training and Doctrine Command is headquartered at Fort Monroe.

Before Europeans arrived, there were three main groups of American Indians living in the area now covered by Virginia. These were the Algonquian, Iroquoian (including Cherokee, Meherrin and Nottoway) and the Siouan Indians.[9]

Sir Walter Ralegh instigated two unsuccessful colonization attempts. Later, a group of men from England invested in a Joint Stock Company called "The Virginia Company" to find gold and other treasures. The company was granted lands in 1606 from what is now North Carolina to New York, all under the name of "Virginia" after Queen Elizabeth I (known as the "Virgin Queen" as she never married). It established the first permanent settlement for England known as Jamestown.[10]

Virginia declared independence from Britain in 1776 and became one of the original thirteen states of the United States.

The state of Virginia runs two of the top public universities in the United States: the University of Virginia and College of William and Mary, the former established by President Thomas Jefferson. Other prominent institutions of higher education include James Madison University, Virginia Polytechnic Institute and Hampden-Sydney College.