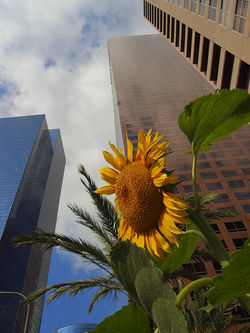 California is a state of the United States of America, located on the west coast of the North American continent. The major metropolitan areas are Los Angeles, San Francisco and San Diego. "Silicon Valley" is the informal name of the technology-focused region centered on San Jose, south of San Francisco. In 2007, 10% of the population of the United States lived in California.

The United States captured California in 1846 as part of the Mexican War; it paid compensation to Mexico through the the Treaty of Guadalupe Hidalgo of 1848. California was never a territory; it went from military control by the U.S. Army to statehood in 1850.

The current Governor of California is Gavin Newsom, a Democrat and the 40th governor. Jerry Brown, also a Democrat, was the 39th governor. The state generally votes for Democratic candidates for president, has a liberal Democratic majority in the legislature and congressional delegation. San Francisco is a major liberal bastion, while Los Angeles is a major factor in political fundraising for national politicians of all stripes.

In the Los Angeles area the San Gabriel Mountains' alluvial fans in the foothills and valleys were ideal for citrus cultivation, which had a steady, high-value national market. Citrus growers needed laborers and discovered American farmers were not interested in hired labor with no chance of ownership. Therefore the growers, questing for a kind of peasantry, brought in ethnic minorities. Sikh, Chinese, Japanese, and Filipino laborers came in the late 19th century, but they too wanted to be owners. After 1900 the growers turned to Mexican immigrants as the primary work force. Large numbers were available from nearby Mexico; they worked hard and were more interested in their community lives than in ownership. Mexicans therefore supplanted other ethnic groups throughout most of California. By the 1920s, some 150,000 to 200,000 Mexicans comprised the bulk of the citrus labor force.[1] 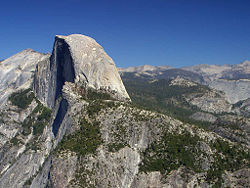 In the "Smartest States" ranking by Morgan Quitno Press, California ranks the 47th among the 50 states in the United States in 2006-2007.[2] 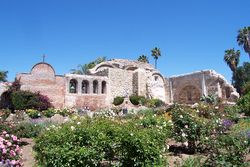 (CC) Photo: Robert A. Estremo
A view of Mission San Juan Capistrano in April of 2005. The Mission has earned a reputation as the "Loveliest of the Franciscan Ruins."