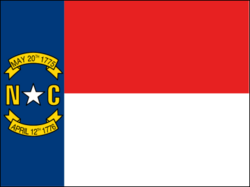 North Carolina's State Motto is: Esse quam videri (To be rather than to seem)

North Carolina has a humid, subtropical climate. Winters are short and mild, while summers are usually very sultry.

The current Governor is Democrat Bev Perdue.[3] North Carolina is dominated by the Democratic and Republican parties. In the 2008 Presidential Election, Democrat Barack Obama won the state, but by a very narrow margin. [4]