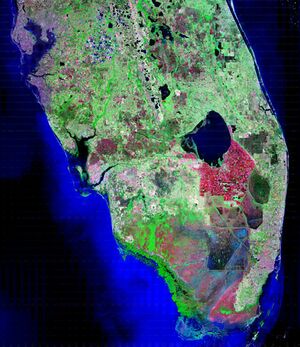 An image of southern Florida's land taken by a satellite. Image courtesy to NASA

Florida is a state of the United States, located in the extreme southeast part of that country. Geographically, Florida is a peninsula largely surrounded by water. The eastern coast borders the Atlantic Ocean, while the western coast touches the Gulf of Mexico. Both coasts represent the longest U.S. coastlines on those respective bodies of water. To the north, Florida is bordered by a succession of southern states, Mississippi, Alabama, and Georgia. The capital of Florida is Tallahassee, while the largest city by population is Jacksonville. Other significant locations in Florida include the cities of Miami, Tampa, and Orlando, which is home of the Walt Disney World complex of resorts and theme parks.

Florida has been occupied for 14,000 years, beginning with the arrival of Paleo-Indians. Around 8000 BC the paleo-indian culture was replaced by, or evolved into, the Archaic culture. Large shell middens and purpose-built mounds appeared beginning around 3000 BC, and fired pottery appeared in Florida by 2000 BCE. By about 500 BCE, the Archaic culture that had been fairly uniform across Florida began to fragment into regional cultures. At the time of first European contact, many different languages were spoken and many different, though related, cultures were practiced in Florida. The cultures of the Florida panhandle and the north and central Gulf of Mexico coast of the Florida peninsula were strongly influenced by the mound-building cultures of the Mississippi Valley, but retained a distinctive character. Maize was cultivated in the panhandle and the northern part of the peninsula, but agriculture in general was absent or very restricted in the tribes that lived in the southern half of the peninsula.[1]

Juan Ponce de León is usually credited with the discovery of Florida, although he may not have been the first Spainard to reach Florida, as he reported an encounter with a Spanish-speaking Indian on the southwest coast of the peninsula later in his voyage. Ponce de León landed on Florida on April 2, 1513, somewhere on the northwest coast of the present state of Florida, and claimed the land for Spain. He named the new land la Florida, Spanish for flowery.[2]

Spain was slow to establish control of Florida. Ponce de León tried to plant a colony on the southwest coast of the peninsula in 1521, but the colonists were driven off by Calusas, with Ponce de León receiving a mortal wound. Pánfilo de Narváez led an expedition that landed on the west coast of the peninsula in 1528, but he had proceeded only to the area near present-day Tallahassee before attempting to return to Mexico by sea. Only four members of the expedition eventually reached Mexico. Hernando de Soto led another expedition which also landed on the west of the peninsula in 1539. That expedition eventually traversed much of what is now the southeastern United States, but it left no lasting mark. A colony was planted at Pensacola in 1559, but it was devastated by a hurricane the same year, and abandoned two years later.

French Huguenots established Fort Caroline near the mouth of the St. Johns River in 1564. The Spanish responded in 1565 by founding St. Augustine on the coast south of the mouth of the St. Johns River. Later that same year the Spanish attacked and destroyed Fort Caroline. Late in the 17th century Franciscan missionaries operating out of St. Augustine began establishing missions to the tribes of northern Florida and southeastern Georgia. Spain established a fort and small port at San Marcos (St. Marks, Florida), near the western end of the territory served by the missions, sometime during the 17th century. Pensacola was re-established in 1698. Spanish presence and control outside of those areas was minimal. Disease and Spanish suppression of revolts greatly reduced the Indian population throughout the 17th century. Late in the 17th century and at the beginning of the 18th century, raids by tribes allied with the English colonies further reduced the Florida tribes, until the few remaining Indians sought refuge at St. Augustine.

At the invitation of Spanish authorities and on their own initiative, bands of Indians from tribes to the north of Florida began moving into the now vacant lands in Florida. The name "Seminole" was applied to some of these Indians at first, and later to all of them. The Seminoles of Florida and Oklahoma, and the Miccosukees of Florida, are their descendents.

At the end of the French and Indian War in 1763, Spain ceded Florida to Great Britain in exchange for the return of Havana, and France ceded that part of Louisiana that was east of the Mississippi River, except for New Orleans. Britain organized these territories into East Florida, with its capital at St. Augustine, and West Florida, with its capital at Pensacola. West Florida stretched from the Apalachicola River to the Mississippi River, and Britain moved its northern boundary up to the latitude of the mouth of the Yazoo River. Britain tried to develop the two Floridas, but Spain captured West Florida during the American Revolutionary War, and Britain returned East Florida to Spain as part of the peace treaty at the end of the war.

Spain was soon in contention with the newly independent United States over Florida. As West Florida extended to the east bank of the Mississippi River, and Spain also possessed Louisiana on the west bank of the Mississippi, Spain controlled the lower part of the Mississippi, and restricted the free passage that Americans believed was necessary for the development of the territories west of the Appalachian Mountains. Spain and the U.S. also disagreed over the northern boundary of West Florida, with the U.S. claiming all of the area added to it by the British. The U.S. acquired the northern part of West Florida by treaty in 1795. After acquiring Louisiana in 1803, the U.S. also claimed that part of West Florida that had been part of Louisiana prior to 1763. In a series of actions from 1810 until 1812 the U.S. seized all West Florida west of the Perdido River. Pre-occupied with war in Europe, Spain was not able to resist.

Spanish Florida was a refuge for runaway slaves. Slaves running away from plantations in the U.S. were welcomed into the "Seminole" bands in Florida, and the Spanish authorities allowed runaway slaves to settle in villages close to St. Augustine, and even converted them into a militia to help defend the town. American settlers were also pushing into southern Georgia and into Florida, encroaching on lands being used by Creeks and Seminoles. Cattle stealing and raids were carried out by both sides. The Americans accused the Spanish of sheltering the Indians and their black allies, and even of supplying them and encouraging them to attack Americans.

During the War of 1812 Britain established a base at Pensacola for operations against the Gulf coast of the U.S., even though Spain was not at war with the U.S. After an attempt to seize Mobile failed, Americans under the leadership of Colonel Andrew Jackson drove the British out of Pensacola. In 1816 the U.S. invaded Florida and destroyed the "Negro Fort", a fortification on the Apalachicola River built by the British for their Creek allies in 1814, but occupied primarily by runaway slaves when the Indians showed no interest in staying in it. In 1818 now-General Jackson again invaded Florida, in what is known as the First Seminole War. He burned Indian villages, captured the Spanish posts at St. Marks and Pensacola, and court-martialed and executed two British subjects while on Spanish soil. The U.S. occupied Pensacola for nine months. In 1819 Spain agreed to cede Florida to the U.S., and the transfer officially occurred in 1821.

On July 17, 1821, Spain formally turned over East and West Florida to the U.S. in a ceremony in Pensacola. General Andrew Jackson, first governor of Florida, represented the U.S. Jackson quickly organized East Florida and what was left of West Florida into a single territory with two counties. Pensacola and St. Autgustine were still the centers of the only substantially developed areas of the state. At first the territorial council alternated meeting in the two cities, but the land journey between them took some twenty days, and the sea voyage was always included the danger of shipwreck. In 1823 Tallahassee, a former Indian town located approximately half-way between Pensacola and St. Augustine, was selected as the site for the territorial capital.

Middle Florida, between the Suwannee and Apalachicola Rivers, was the fastest growing part of Florida during the territorial years, and by 1845 held almost half of the state's population. Many plantations were established in Middle Florida, as well along the northern part of the east coast of Florida. The peninsula, however, remained very sparsely populated.

In 1823 the Treaty of Moultrie Creek moved most of the Indians in Florida onto a reservation in the interior of the Florida peninsula. After Andrew Jackson's election as President of the United States, a campaign to move all Indians to west of the Mississippi River gained momentum. The 1832 Treaty of Payne's Landing provided for the removal of the Indians in Florida to the West, but most Seminole leaders denounced the treaty and refused to leave, eventually leading to the Second Seminole War, which lasted from 1835 to 1842. Some 300 Seminoles who had avoided capture were allowed to remain in southern Florida.

In 1845 it became a state of the United States.

During the American Civil War, Florida seceded and joined the Confederate States of America but was regained by the Union after the war.

As a Southern state, Florida's politics is generally dominated by conservatives. The current governor is Charles Crist, a member of the Republican Party.