I've picked "Controversies". Not just because it's an opportunity to show how we handle current ones, though that's an idea, too. No, I was musing over how things can be controversial in one era, and not even raise an eyebrow in another. Or how one can think a controversy is over, and then the social cycle changes, and all of a sudden it's controversial again. In olden days a glimpse of stocking was looked on as something shocking, but now God knows, anything goes!. Our MC, Aleta

Are you stuck finding something to write about? Perhaps you can edit an article suggested by one of the partiers below, or perhaps edit or start one of these. Don't worry about turning out a super-polished first draft! Stubs - short articles that need to be expanded later - are great to start with!

And, not all controversial issues get people up in arms; some things passionately argued by some folks arouse only mild discussion or interest in others:

Oh, oh. It seems to me that when I first joined The Other Place years ago there was an absolutely fierce, all-out battle raging about this, with high emotions on all sides. Like, "I have renamed the article Child Mutilation and Torture and don't you killers try to change it back!". And so forth. Dunno how it came out, though. Maybe they're still fighting it. Let's hope that emotions here at CZ about this article stay a little calmer. Hayford Peirce 18:13, 7 January 2009 (UTC)

As I mentioned on the article talk page, it may be appropriate to disambiguate between procedures on males and females. While Medical Subject Headings does include circumcision; circumcision, male; and circumcision, female, the term "Genital Mutilation, Female" or "Female Genital Manipulation" is common in medical literature. The latter two are preferable, I believe, because there is only one type of procedure in the male but multiple ones in females; the latter are usually more radical. Howard C. Berkowitz 18:25, 7 January 2009 (UTC)

I suppose a Topic Informant article on my observation, at the National Zoo in Washingon, of the sexual initiation of a mere slip of a 17-year old bull elephant probably comes under what the military calls Negative Need to Know. Howard C. Berkowitz 21:04, 7 January 2009 (UTC)

By the way, are we having server problems? I keep getting error messages. -Derek Hodges
Took a look at Helen Duncan-Medium? I'd say she was a large. -Derek Hodges 06:32, 8 January 2009 (UTC)

Whether this is the right heading or not, I couldn't resist "gun". From my sandbox, maybe a bit early since the top-level articles are still there, comes Vietnamese Communist grand strategy.

In recent years, there's been a lot of opening of archives on both sides, and some very serious participation in historical work and personal meetings between the Vietnamese and the American side. I highly recommend the book We are soldiers still by Moore and Galloway, about their multiple trips back, and some truly touching sharings between once-deadly enemies.

A lot of questions now have answers, although it sometimes was a matter of which leader could make less sense. For me, however, the big controversy is what did the North Vietnamese really have in mind in their operations from roughly October 1965 to January 1966? To me, this remains the single most puzzling aspect of the war.

Maybe someone will know of a source I've missed -- easy enough, since I don't read Vietnamese.

Anyway, please forgive the semi-sandbox, but if you want controversy, here's one among military historians interested in this. Howard C. Berkowitz 03:11, 7 January 2009 (UTC)

Paul had his belly full of controversy and didn't want to pour oil on the fire (in case you're wondering: two Dutch sayings), but he happened to come across the beautiful word genethlialogy, so he couldn't resist. 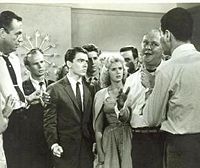 Ohhh! Mea maxima culpa! I didn't think what a nightmare this topic might be from a constabulary point of view! Sorry, amigo! Aleta Curry 09:39, 7 January 2009 (UTC)

Sorry, I couldn't handle starting a new article about anything remotely controversial, since I still have so many already-started ones that need my attention. So I did a little authoring on C (programming language) as penance.Pat Palmer 18:12, 8 January 2009 (UTC)

I'm not sure where best to put this (probably Military and History workgroup pages and forums), but I just happened across a list of "most wanted" research topics of the U.S. Army's Combined Arms Center. [1] Perhaps some people here might like to look at this to see the questions that are being asked, and get some article ideas. Howard C. Berkowitz 20:05, 7 January 2009 (UTC)