Regardless of its preparation, coffee is one of the most popular and widely consumed beverages in the world today. It is well-known to contain the stimulant caffeine as well as antioxidants and other plant chemicals (phytochemicals). Coffee is typically brewed from roasted beans (actually seeds) harvested from cherries grown from the genus of plants known as Coffea. There are six species of tropical Coffea trees[1], of which there are as many as 6,000 known varieties.

The outer skin of the coffee cherry is the exocarp; beneath it is a thin layer of pulp known as the mesocarp, then a slimy layer called parenchyma. The beans within the parenchyma are covered in the thin layer referred to as the endocarp. Inside the endocarp are two beans, usually positioned next to each other, divided by a membrane called the spermoderm. 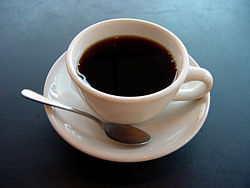 Although the availability of coffee is almost ubiquitous, Coffea trees can only be grown in certain climates. The most effective places to grow coffee are in tropical or sub-tropical environments at high altitudes. Because of this, distinct places in the world are prime for Coffea cultivation: Brazil, Colombia, India, Indonesia, Mexico, Puerto Rico, and Vietnam are the top Coffea growing and exporting countries.

Coffee can be prepared and served in a number of ways. A common Western method calls for roasted beans to be ground (coarse) and then placed into a paper filter, where hot water is then strained into the filter, soaking the grounds, from which the coffee drips into a coffee pot. The appliances that produce coffee in this way are known as drip-style coffee makers, or "drip-pots" in the USA, and as coffee filter machines in Europe. Greek, Turkish and other coffees from the Ottoman period are made by rapidly boiling finely-ground roasted beans, along with the appropriate amount of sugar, in a special small metal pan. The resulting mix is poured into a small cup, of which only the upper liquid is drunk. The bottom third or so of the cup contains coffee grounds.

A popular, originally Italian, method of preparing coffee is to finely grind heavily roasted beans and compress them into a metal filter. Hot water is then forced through the filter, producing a concentrated form of coffee that is very dark in color and contains a higher percentage of caffeine per milliliter compared to other forms. This is known simply as espresso and is often served in quantities of ounces, or "shots." Espresso machines can create pressure by either heating water up to its boiling point, creating steam to produce the concentrate, or through a pump that injects water into the compressed grounds. The amount of compression (measured in pounds/square inch (psi)) varies between the different styles of appliances.

Although there are naturally occurring differences in the caffeine content and antioxidative properties of Coffea plants, there remains a commercial demand for decaffeinated coffee, which must be chemically treated in order to remove 97% of the caffeine present in the beans. The two most common types of beans sold world-wide, Arabica (Coffea arabica) and Robusta (Coffea robusta), do contain different levels of alkaloid caffeine, the latter typically having more than the former. However, "decaf" (as its commonly referred to) is produced by one of two post-harvest methods. In the first, known as indirect, the beans are soaked in hot water to dissolve the caffeine. The water is then treated with a chemical solvent to remove the caffeine. In order to maintain the taste or flavour constituents, the water is resprayed back into the beans. The direct method involves soaking the beans in the chemically treated water, removing the solvent from the water, and then allowing the beans to resoak.

There are four different chemical processes by which coffee can be decaffeinated[2]:

Coffee contains antioxidants, caffeine, and other plant chemicals that may affect disease risks. Although nutritionists, researchers, and consumers are aware that coffee contains these potentially beneficial compounds, the precise effects of these compounds are not always well understood and may not affect everyone equally when ingested. For example, some compounds found in coffee may be harmful or unsuitable for certain individuals, including pregnant women, epilepsy patients, and those with, or at risk for, osteoporosis. Coffee preparation is also important: how coffee is prepared can influence how beneficial or harmful it is for one's health. For these reasons, coffee drinkers should be aware of the various risks associated with this popular beverage.

In 2007, current scholarly knowledge of the effects of coffee consumption on cardiovascular disease, physical fitness, brain function, reproduction, bone and joint health, type II diabetes and weight loss, and the digestive system was for the first time synthesized from various journals on nutrition, medicine, and health.[3] The results of that research, as well as even more recent findings, have been outlined below.

At present, no clear causal relationship has been found between cardiovascular disease (CVD) and coffee consumption. Although the results of studies conducted within the past two decades have been contradictory or inconclusive, there are some possible links between coffee consumption and the risk for CVD: for example, coffee prepared without a filter contains the diterpene compounds cafestol and kahweol, which are known to increase low density lipoprotein levels associated with unhealthy cholesterol accumulation.[4] Additional risk factors, such as smoking or a family history of heart disease, may also confound the relationship between coffee consumption and CVD. Nevertheless, most current studies suggest that habitual and moderate consumption (2-3 cups per day) of filtered coffee does not increase CVD risk.

One year 2010 interventional study in healthy adult humans found an unfavorable cardiovasuclar effect shortly following consumption of a single cup of Italian espresso caffeinated coffee, including a statistically significant increase in arterial blood pressure, and reduction in brachial artery flow mediated dilation, the latter suggesting impairment of function of arteriolar endothelium, the cells lining the blood-side of the vessels, cells that importantly regulate blood flow to organs and blood pressure.[5]

Many studies have indicated that low to moderate doses (up to 200 mg) of caffeine may have ergogenic (beneficial) effects on physical fitness.[6] Caffeine in low doses may increase exercise tolerance, reduce muscle pain during exercise, improve respiratory efficiency, delay fatigue, and increase endurance. Despite the documented benefits of caffeine, caffeinated coffee is commonly considered to be a mild diuretic, although recent studies have found that this is not the case and that caffeine does not interfere with fluid-electrolyte balance in athletes.[7]

Coffee consumption has been related to various aspects of mental health and brain function, including lowered risks for some neurodegenerative diseases. For example, caffeinated coffee is associated with positive effects on mental alertness and psychological lift.[8] Fortunately, among habitual drinkers, even heavy intake does not seem to be associated with decreased sleep duration.[9] The current scientific literature suggests, overall, that coffee and caffeine are more likely to enhance rather than impede mental function in most individuals. In addition, recent epidemiological studies suggest that habitual coffee drinking may help delay the onset of Alzheimer's disease,[10] and regular and moderate caffeine use has also been associated with a lower incidence of Parkinson's disease.[11]

Because caffeine may interfere with reproduction and reproductive fitness among females, pregnant women are commonly advised against drinking caffeinated coffee during pregnancy. Studies conducted over the past few years indicate a possible relationship between caffeine and reduced fetal viability,[12] but this relationship is not well understood and results have often been contradictory. While some studies seem to suggest that caffeine intake increases the risk for spontaneous abortion, other studies find no such link. Moreover, moderate coffee drinking may even be beneficial during later stages of pregnancy,[13] but until more conclusive results are available, more than one cup of caffeinated coffee per day is not recommended for pregnant women. Although previous studies suggested an association between coffee consumption and an increased risk of ovarian cancer among pre-menopausal women, the most recent research suggests that this is in fact not the case.[14]

Earlier studies have indicated that coffee drinkers might be at greater risk for diseases that affect bone and joint health, including an increased risk for rheumatoid arthritis and osteoporosis. Although the former concern now appears unsubstantiated,[15] studies do support a relationship between caffeine intake and calcium imbalance: low to moderate coffee drinking does not appear to significantly impact daily calcium balance, but amounts greater than two cups per day may increase one's risk for reduced bone mineral density later in life.[16] Drinking a glass of milk per day may offset this risk, however.

Type II diabetes and weight loss are of great concern in the United States today due to the prevalence of obesity, type II diabetes, and other weight-related disorders. The most current research suggests that regular, moderate coffee drinking may help decrease the risk for these epidemic diseases,[17] although the precise mechanisms underlying this decreased risk are not fully understood. Chlorogenic acid, a powerful antioxidant present in coffee, may be responsible for a lowered risk for type II diabetes among habitual coffee drinkers, and increased coffee consumption was also recently associated with reduced weight gain.[18] Nevertheless, more research is needed before the relationship between diabetes, weight loss, coffee, and caffeine can be clarified.

Several studies over the past decade have related coffee consumption with lowered risks for diseases involving the digestive system, including symptomatic gallstone disease, colorectal cancers,[19] and chronic liver disease. Coffee is also known to contain dietary fiber in greater amounts than other common beverages.[20]

As with many beverages, coffee seems to be non-harmful for individuals who drink it regularly and in moderation, and it may even be beneficial for most people. Not all preparation methods are alike, however, and there is strong evidence that filtered coffee is a much healthier alternative to boiled or French-pressed coffee. There is little evidence to suggest that the caffeine present in coffee is unhealthy for most individuals, although it is a stimulant and should not be consumed in large quantities. Caffeine may also be an ergogenic aid, for both mental alertness and physical fitness, when consumed in moderation. It should be noted that regardless of preparation and whether or not it contains caffeine, coffee is a good source of antioxidants.