Alzheimer's the most common cause of dementia, afflicting 24 million people worldwide. Alzheimer's is a terminal disease for which there is currently no known cure. It is most commonly found in people over 65 years old, although a less-common form called Familial Alzheimer's disease, or "early-onset Alzheimer's", also occurs - effecting about 5% of the total of Alzheimer's sufferers.[1]

Typically, the disease begins many years before it is diagnosed. In its early stages, short-term memory loss is the most common symptom, which is often initially thought by the sufferer to be caused by other factors, such as aging or stress.[2] Later symptoms of the disease include confusion, anger, mood swings, language breakdown, long-term memory loss, and the general "withdrawal" of the sufferer as his or her senses decline.[2][3] Gradually the sufferer will lose minor, and then major bodily functions, until death finally occurs.[4] Survival after diagnosis has been estimated to be between 5 and 20 years.[5][6]

A classification has been proposed by the the ad hoc International Working Group for New Research Criteria for the Diagnosis of AD.[7]

Prodromal Alzheimer's disease includes patients with positive biomarkers who have mild cognitive dysfunction that does not cause significant functional impairment.

Although the symptoms are common, they are typically experienced in unique ways.[8] "Stages" are commonly referred to by professionals to describe the progressive nature of Alzheimer's (typically "early", "mid" and "late onset") but the symptoms can cross over these "boundaries" for many sufferers.

The symptoms of Alzheimer's disease are generally reported to a doctor or physician when memory-loss (or symptoms surrounding memory loss) begin to pose a serious concern. When Alzheimer's disease is suspected, diagnosis is typically confirmed by a behavioural assessment, and some form of cognitive test. Often this is followed by a brain scan.[9]

Although apolipoprotein E4 is an important susceptibility gene for Alzheimer's disease][10], its sensitivity and specificity are insufficient (65 and 68 percent, respectively) to be used as a diagnostic test.[11]

However, the level of apolipoprotein E4 in cerebrospinal fluid may be predictive.[12]

Amyloid beta-protein may be elevated in the cerebrospinal fluid of some patients.[12]

The etiology of Alzheimer's disease is incompletely understood. Alzheimer's disease is associated with "Senile plaques" and "neurofibrillary tangles" in the brain.[13] The incorrect folding of proteins leads to the formation of amyloid plaques. The prion protein (PrPC) may be the cellular receptor for amyloid-beta-oligomer.[14] Current research aims to determine if such plaques are the result of, or the cause of, Alzheimer's disease.

No treatment has been found to stop or reverse the disease, and it is not known whether current preferred treatments directly slow the spread of Alzheimer's in the brain, or simply manage the symptoms - and thus slow the progression of the disease that way. Many preventative measures have been suggested for Alzheimer's disease, but their values are uncertain: mental stimulation, exercise and a balanced diet are usually recommended, both as a possible prevention and as a sensible way of managing the disease.[16]

Currently available medications offer relatively small symptomatic benefit for some patients but do not slow disease progression. The American Association for Geriatric Psychiatry published a consensus statement on Alzheimer's treatment in 2006.[17]

A systematic review found that the atypical antipsychotics risperidone and olanzapine showed the most benefit of all drugs; however they may increased the risk of stroke.[18]

Randomized controlled trials showed either small or absent benefit from acetylcholinesterase inhibitors[19] such as donepezil.[20][21][22]

The N-methyl-d-aspartate receptor antagonist memantine has shown effectiveness[23] but does not add benefit to donepezil .[22]

Due to the incurable and degenerative nature of the disease care-management of Alzheimer's is essential. The role of the main Carer is often taken by the spouse or a close relative.[24] Caregivers may themselves suffer from stress, over-work, depression, and from being physically assailed.[25]

Famous people who have, or have died of Alzheimer's disease, are the US president Ronald Reagan, the UK Prime minister Harold Wilson, the writers Terry Pratchett and Iris Murdoch, and the film stars Rita Hayworth and Charlton Heston. 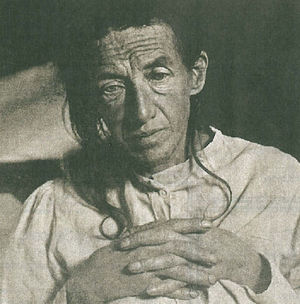