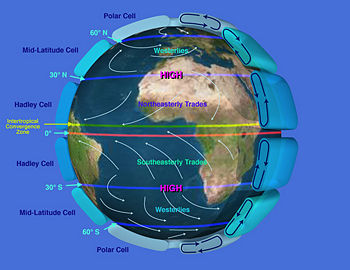 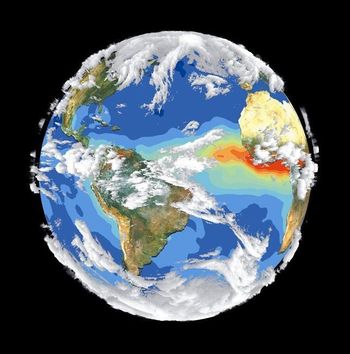 Climate, from the Greek word klima (κλίμα), is the overall weather pattern for an extended period for any defined geographical location which may be over any size of area up to and including the entire Earth. Climate differs from weather in that on a particular day in a desert, for example, there may be rainy weather, but for most days for many years there is little or no rain—rainy weather for a day in a desert climate for many years. Two places, in other words, like Bombay, India and Vladivostok may both have similar weather for a brief time, such as a cloudless, sunny day, but their climate is extremely different. Put another way, weather may change from day to day or hour to hour, whilst climate is the average weather pattern for many years. Commonly the weather patterns that define a climate are averaged for a period of 30 years.

Climate is also different from season. A season [1] is usually a period of time of months, in which the weather can change drastically. Typhoon season in Asia is very windy and rainy. In some places it may rain a great deal for many months. The reminder of the year, the weather can be virtually without rain.

Weather patterns and overall climate are influenced by

Naturally occurring aerosols are from various sources including dust storms, sea-salt from sea spray, particles from forest and grassland fires, volcanic eruptions and biogenic emissions from crops, trees, and other vegetation. Human activities also produce aerosols from pollution through industrial processes and burning fossil fuels, by altering natural surface cover, and through fires. Human made aerosols comprise about 10% of the total, especially in industrialised sites, slash and burn agricultural regions and over-grazed grasslands. Aerosols are also created and modified by chemical processes in the atmosphere and are continuously cycled among the earth's oceans, atmosphere, and biosphere. Aerosols also affect photosynthesis and agricultural production and, eventually, vegetative cover.

Among other factors, climate strongly depends on atmospheric circulation. Some factors determining it are:

Climatology, the study of climates, is a combination of atmospheric science, hydrology, geology, meteorology, astrophysics and other fields. Global warming, a major focus of climatology, is studied to determine its causes and potential effects. See the main article about global warming for a discussion of the current theories concerning its causes.

Paleoclimatology is the study of ancient climates. Different types of rock and minerals form under specific climatic conditions: wet and dry, warm and cool. This is also true of ancient life forms whose presence may be determined from the fossil record. As the earth’s climate changes and continents move due to plate tectonics, the amount of sunlight received locally will vary, leading to changes which then are registered in strata. Coal deposits develop under wet conditions, bauxite deposits are evident where it was warm and wet, evaporites and calcretes occur under warm and dry conditions, and tillites where it was wet and cool. The ancient distribution of different rock types provide evidence of how the global climate has changed through time and how the continents have travelled across climatic belts.[11]

Microclimates are distinctive, small-scale climates that are specific defined areas, such as valleys or regions on either side of a geological feature such as a mountain range that alters the precipitation, wind, sunlight, humidity to such an extent as to make the locale climatically different from the surrounding areas. A heavily wooded park within a industrialized urban setting will differ climatically from the surrounding buildings and paved areas, a valley branching off a large region of desertification may offer significant climatic variables. [12][13]

Over time, plants and animals may adapt to these different microclimates to such an extent that they may thrive in a small defined area with a specific microclimate and yet if they are moved a short distance they will languish and show reduced growth and health, possibly even reduced ability to multiply.

Microclimate may also refer to artificially controlled environments such as homes, office buildings, botanical gardens, archives or museums where specific requirements are not naturally available.[14][13]

Urban heat islands are microclimates created by urban areas that are composed of large amounts of building materials, machinery and associated to artificial heating. Buildings and paved areas such as streets and parking lots do not absorb rainwater and retain heat generated by solar radiation. Industry and vehicles also generate significant amounts of heat. The decrease in vegetation and exposed soil also increases temperature as a result of reduced evaporation from natural sources and, thus, reduced humidity. The process of evaporation uses latent heat and reduces temperature. Urban areas also generate pollution, introducing large concentrations of aerosol and naturally and non-naturally occurring atmospheric gases.[15]