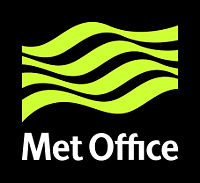 The Met Office (originally an abbreviation for Meteorological Office, but now the official name in itself), which has its headquarters at Exeter in Devon, is the United Kingdom's national weather service and an executive agency of the Ministry of Defence.

In 2003, the Met Office moved its headquarters to Exeter in Devon from its previous location of Bracknell in Berkshire. Part of the Met Office complex in Exeter is the Met Office College, which handles the training for internal personnel and many forecasters from around the world. The Hadley Centre for Climate Prediction and Research is also part of the Exeter complex.

The Met Office now has a worldwide presence, including a forecasting center in Aberdeen and offices in Gibraltar and in the Falkland Islands.

Other parts of the Met Office are:

Established in 1854 as a small department within the Board of Trade as a service to mariners.[3] The loss of the passenger vessel the Royal Charter and 459 lives off the coast of Anglesey in a violent storm in October 1859 led to the first gale warning service. In 1861,a network of 15 coastal stations was established from which visual gale warnings could be provided for ships at sea.

The development of the electric telegraph in the 1870's led to the more rapid dissemination of warnings and also led to the development of an observational network which could then be used to provide synoptic analyses. In 1879 the Met Office started providing forecast to newspapers.

Following the First World War the Met Office later became part of the Air Ministry in 1920. In 1922, weather forecasts are broadcast by BBC radio for the first time.

In 1936, the Royal Navy began providing their own forecasts and the Met Office no longer provides services to them.

In 1990, the Met Office became an Executive Agency of the Ministry of Defence. Also, the Hadley Centre for Climate Prediction and Research was opened in that same year.

The Met Office's new headquarters in Exeter were officially opened in 2004. The Met Office now has a quasi-governmental role, being required to act commercially as well as being an executive agency of the Ministry of Defence.

The Met Office has the responsibility to issue severe weather warnings for the United Kingdom through the National Severe Weather Warning Service (NSWWS). These are weather events that may affect transport infrastructure or endanger people's lives. In March 2008, the system was improved and a new stage of warning called the "Advisory" was introduced.[5]

The main role of the Met Office is to produce forecasts by gathering data from satellites in space and from observations on Earth and processing that data using supercomputers. The processed forecast data are then passed on to companies who acquire it. In particular, two of the main media companies, the BBC and ITV broadcast forecasts using the Met Office's data.[6][7] This is mainly how the public are informed of weather events which may affect day-to-day life.

The Met Office is also one of only two World Area Forecast Centers or WAFCs, and is referred to as the London WAFC. The other WAFC is located in Missouri, USA but known as the Washington WAFC. WAFC data are used daily to safely route aircraft, particularly on long-haul journeys. The data provide details of wind speed and direction, air temperature, cloud type and tops, and other features of interest to the aviation community, such as volcanic ash eruptions.

The Met Office issues air quality forecasts made using NAME, the Met Office's medium-to-long-range atmospheric dispersion model. It was originally developed as a nuclear accident model following the Chernobyl accident in 1986, but has since evolved into an all-purpose dispersion model capable of predicting the transport, transformation and deposition of a wide class of airborne materials. NAME is used operationally by the Met Office as an emergency response model as well as for routine air quality forecasting.

In the air quality forecasts, the level of pollution is described either as an index (ranging from 1 to 10) or as a banding (low, moderate, high or very high). These levels are based on the health effects of each pollutant as shown just below.

The forecast is produced for a number of different pollutants and their typical health effects are shown in the following table.