Diabetes mellitus type 2 is a "subclass of diabetes mellitus that is characterized initially by insulin resistance and hyperinsulinemia; and eventually by glucose intolerance; hyperglycemia; and overt diabetes. Type II diabetes mellitus is no longer considered a disease exclusively found in adults. Patients seldom develop ketosis but often exhibit obesity."[1]

The U.S. Centers for Disease Control and Prevention provides a more expanded description:[2]

Type 2 diabetes was previously called non–insulin-dependent diabetes mellitus (NIDDM) or adult-onset diabetes. In adults, type 2 diabetes accounts for about 90% to 95% of all diagnosed cases of diabetes. It usually begins as insulin resistance, a disorder in which the cells do not use insulin properly. As the need for insulin rises, the pancreas gradually loses its ability to produce it. Type 2 diabetes is associated with older age, obesity, family history of diabetes, history of gestational diabetes, impaired glucose metabolism, physical inactivity, and race/ethnicity. African Americans, Hispanic/Latino Americans, American Indians, and some Asian Americans and Native Hawaiians or Other Pacific Islanders are at particularly high risk for type 2 diabetes and its complications. Type 2 diabetes in children and adolescents, although still rare, is being diagnosed more frequently among American Indians, African Americans, Hispanic/Latino Americans, and Asians/Pacific Islanders. [3] 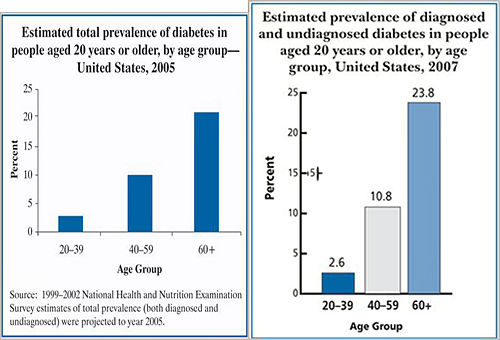 Maturity-onset diabetes of the young (MODY)

Maturity-onset diabetes of the young (MODY) is "an autosomal dominant form of diabetes typically occurring before 25 years of age and caused by primary insulin secretion defects. Despite its low prevalence, MODY is not a single entity but represents genetic, metabolic, and clinical heterogeneity"[8] Several mutations may cause MODY and these variations are labeled MODY1, MODY2, ... MODY9. Because these mutations may cause diabetes at a later ge and other conditions can cause early diabetes, it has been suggestions to label these mutations "autosomal dominant noninsulin-dependent."[9]

The World Health Organization definition of diabetes is for a single raised glucose reading with symptoms, otherwise raised values on two occasions, of either[10]:

An alternative algorithm that diagnoses diabetes with high sensitivity and specificity:[11]

Impaired fasting glucose is defined as:[10][15]

Impaired glucose tolerance is defined as[10][15]:

A cost-benefit analysis suggests that screening should start between age 30 and 45 and be repeated every 3 to 5 years.[16]

Regarding the mass screening for diabetes, in 2014 the US Preventive Services Task Force draft recommendations were:[17]

In 2005, an evidence report by the Agency for Healthcare Research and Quality (AHRQ) concluded that "there is evidence that combined diet and exercise, as well as drug therapy (metformin, acarbose), may be effective at preventing progression to DM in IGT subjects".[25]

The American College of Endocrinology announced in 2008 clinical practice guidelines for the treatment of prediabetes.[26]

Accuracy of tests for early detection

Glycosylated hemoglobin A values are not perfect.[35]

A second clinical prediction rule, QDSCORE®, may "predict the 10-year risk of developing Type 2 diabetes in the UK".[30]

In selected patients, dieting to loose approximately 3% of body weight can remit mild, assymptomatic diabetes in approximately 50% of patients according to one trial.[49]

Intensive insulin treatment with a goal of normoglycaemia can cause diabetes in newly diagnosed patients to remit in one of four patients after one year of follow-up.[50] However, there was no control group that did not receive intensive therapy.

For most patients the goal of treatment should be a Hb A1c of 7.0%. The benefit of intensive therapy is not certain.[56] Below is a summary of clinical practice guidelines and randomized controlled trials that support this recommendation.

In older patients with life expectancy of less than 5 years:

The current ADA recommendation is from a consensus statement of 7% following the results of the trials below that suggest no benefit from goals below 7%.[63]

In older patients, clinical practice guidelines by the American Geriatrics Society states "for frail older adults, persons with life expectancy of less than 5 years, and others in whom the risks of intensive glycemic control appear to outweigh the benefits, a less stringent target such as 8% is appropriate."[67] 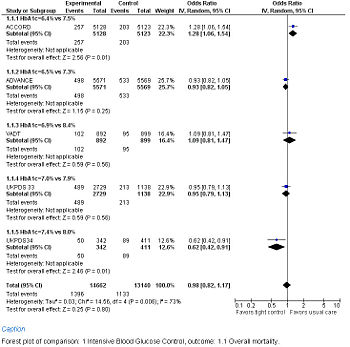 (CC) Photo: Robert Badgett
Forest Plot showing meta-analysis of randomized controlled trials of differing target glucose control and mortality for diabetes mellitus type 2. Note the heterogeneity due to increased death when the glycosylated hemoglobin A (Hb A1c) target was 6.0% in the ACCORD trial

A goal fasting blood glucose of below 108 mg/dl (6 mmol/L) over 10 years resulting in an Hb A1c of 7% over 10 years was found in the United Kingdom Prospective Diabetes Study (UKPDS 33) randomized controlled trial. Intensive control reduced diabetic complications in one out of every 20 patients (number needed to treat = 20).[68]

A goal fasting blood glucose of below 108 mg/dl (6 mmol/L) over 10 years resulting in an Hb A1c of 7.4% over 10.7 years in the metformin group compared to 8.0% in the conventional group in the UK Prospective Diabetes Study (UKPDS 34) randomized controlled trial. Metformin reduced cardiovascular disease in one out of every 11 patients (number needed to treat = 11).[69]

A Hb A1c of 6.9% over 6 years was found in the VA Diabetes Trial (VADT) randomized controlled trial to have no significant effect on diabetic complications.[70] Although the treatment group averaged an Hb A1c of 6.9%, the goal was 6.0%.[71]

A Hb A1c goal of 6.5% over 5 years was found in the ADVANCE randomized controlled trial not to reduce mortality using a protocol whose first step was a sulfonylurea (gliclazide). The intervention group had 0.9% less nephropathy, but more severe hypoglycemia.[72]

A Hb A1c goal of 6% over 3.5 years was found in the ACCORD randomized controlled trial found to increase serious complications.[73][74]

The ORIGIN trial used basal insulin supplementation to reduce the Hb A1c from 6.4% to 6.2%. There was no benefit on cardiac outcomes but there was an increase in hypoglycemia and weight gain.[75]

The older University Group Diabetes Program (UGDP) also found no benefit in a controversial randomized controlled trial.[77][78][79][80][81] The UGDP randomized approximately 1000 patients to one of five treatment groups and followed from 1962 to 1975: phenformin, tolbutamide, small fixed-dose insulin (ISTD) based on body-surface area (averaged 14 units per day), variable-dose insulin (ISTD) (averaged 45 units per day), n (IVAR), or placebo. The trial found statistically significant increase in cardiovascular deaths among the patients treated with tolbutamide and so this group was stopped in 1969. The phenformin group was also stopped early due to increased mortality. The ISTD group had no reduction in blood glucose. The IVAR group had a reduction in the IVAR group of about 2.0 mmol/L (36 mg/dL) which correlates to a 1% difference in the level of Hb A1c.[82] Problems in the trial include: 1) "25% of placebo and tolbutamide-treated subjects dropped out or changed medication during the trial[79], 2) glucose values were only checked quarterly[80], 3) smoking history was not measured[80] 4) reduced fraction of males in the IVAR group (IVAR=22%; placebo=31%).

Clinical practice guidelines are available by the American College of Physicians (ACP) and a consensus group[83] are available. The ACP recommends:[84]

This recommendation was updated without changes in 2013.[85]

Two clinical practice guidelines are available; however, both of these guidelines were developed without broad representation of stakeholders.[86] This may lead to overly aggressive clinical recommendations.

Since the meta-analysis, two negative randomized controlled trials have been published.[89][90]

Two clinical practice guidelines are available; however, both of these guidelines were developed without broad representation of stakeholders.[86] This may lead to overly aggressive clinical recommendations. A meta-analysis has addressed this issue.[91]

Regarding [[perioperative care|intraoperative control of glucose, a randomized controlled trial concluded "the increased incidence of death and stroke in the intensive treatment group raises concern about routine implementation of this intervention."[92]

Lower blood sugars may be beneficial in the intensive care of children.[93]

Self monitoring of blood glucose

A low glycemic index diet may reduce the HbA1c.[97]

Sulfonylureas are insulin secretagogues. They cause weight gain.

Meglitinides stimulate insulin release. Examples include nateglinide, repaglinide, and their analogs. These are associated with weight gain.[98]

Biguanides are insulin sensitizers and include metformin and phenformin.

α-glucosidase inhibitors reduce carbohydrate absorption and include acarbose and miglitol.

In general, these do not cause weight gain.[98]

Incretin therapy can reduce the glycosylated hemoglobin[100] but may increase cancer[101][102] and pancreatitis[101].

If dietary changes are not successful, medication is needed.

Metformin is usually the first drug according to clinical practice guidelines.[59] Metformin and second-generation sulfonylureas and are excellent choices according to a systematic review of randomized controlled trials.[107] Confirming the role of metformin, the initial choice of anti-diabetic drug has been compared in a randomized controlled trial which found "cumulative incidence of monotherapy failure at 5 years of 15% with rosiglitazone, 21% with metformin, and 34% with glyburide."[108] While thiazolidinediones such as rosiglitazone are effective, they may increase drug toxicity such as heart failure and fractures.

For patients with heart failure, metformin may be the best choice.[109]

If antidiabetic drugs fail, insulin therapy may be necessary. The initial insulin regimen can be chosen based on the patient's blood glucose profile.[110] When insulin is started, "insulin secretagogues (sulfonylurea or glinides) should be discontinued, or tapered and then discontinued, since they are not considered to be synergistic."[59]

Initially, adding bedtime insulin to patients failing oral medications is more effective and with less weight gain than using multiple dose insulin.[111] Nightly insulin combines better with metformin that with sulfonylureas.[112] The initial dose of nightly insulin (measured in IU/d) should be equal to the fasting blood glucose level (measured in mmol/L). If the fasting glucose is reported in mg/dl, multiple by 0.05551 (or divided by 18) to convert to mmol/L.[113]

When nightly insulin is insufficient, multiple doses are required.

Treating to a goal of LDL-C < 70 mg/dl and systolic blood pressure to < 115 mm Hg may cause regression of carotid initial media thickness in a randomized controlled trial.[121]

Aspirin may not be justified just because a patients had diabetes.[122]

The HOPE study suggests that diabetics should be treated with angiotensin-converting enzyme inhibitors (specifically ramipril 10 mg/d) if they have one of the following [123]:

After treatment with ramipril for 5 years the number needed to treat was 50 patients to prevent one cardiovascular death.

Initially, other angiotensin-converting enzyme inhibitors were thought to be not be as effective.[124] However, subsequent studies have shown the apparent benefit of ramipril independent of blood pressure reduction was more likely due to the administration of ramipril at night and recording blood pressures during the day when the least effect of ramipril was present.[125][126]

According to clinical practice guidelines, when treating hypertension in the diabetic patients, the goal blood pressure is 130/80 which is lower than in non-diabetic patients.[129] However, a subsequent randomized controlled trial found no benefit in treating to a level of 120 mm Hg.[127]

"In subjects with type 2 diabetes and hypertension but with normoalbuminuria, the use of trandolapril plus verapamil and trandolapril alone decreased the incidence of microalbuminuria to a similar extent. The effect of verapamil alone was similar to that of placebo," according to the BENEDICT randomized controlled trial.[130]

Statin therapy prevents major vascular events in about 1 of every 24 patients with [diabetes who use the treatment for 5 years if they are similar to the patients in the meta-analysis by Kearney et al (Number needed to treat is 24).[133]

Whether diabetes is an equivalent risk factor to having an existing myocardial infarction is debated.[134]

Treating to a goal of LDL-C < 70 mg/dl and systolic blood pressure to < 115 mm Hg may cause regression of carotid initial media thickness in a randomized controlled trial.[135]

Hypoglycemia from intensive therapy is associated with cardiovascular adverse outcomes.[137]