In physiology, the hormone Insulin is the key regulator of blood glucose levels and is released from specialized beta cells within the Islets of Langerhans of the endocrine pancreas. Whilst the Islets comprise only a small percentage of the pancreas (1-2 %), they serve the major physiological function in homeostatic control of blood glucose concentrations and cellular metabolism. The beta cells of the pancreas release stored insulin in response to a range of neural, nutrient, hormonal and chemical stimuli but primarily in response to increased concentrations of glucose. Insulin secretion is increased by high blood glucose levels and inhibited by falling glucose levels. The overall effect of insulin is to stimulate anabolic (energy storage) processes to lower blood levels of glucose, fatty acids, and amino acids and to promote their conversion to the respective storage forms of glycogen, triglycerides and protein. 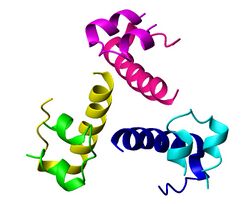 Primary mechanism of Insulin secretion by the pancreas[2]

Patients suffering from diabetes mellitus have abnormal insulin function. In Type-I (or Juvenile), the pancreas produces insufficient amounts of insulin, resulting in high blood sugar levels. In Type-II diabetes, insulin receptors on cells become less responsive to insulin in the blood and there is a general alteration in the way cells respond to this hormone. Thus, while the pancreas may be producing enough insulin, the hormonal signal does not get through, resulting in high blood sugar levels.

Available insulin include human and pork derived with the latter infrequently used after human preparations were available. In addition, analogues of human insulin are available but have uncertain benefit.[3][4]

The commonly used types of insulin are:

Short-acting insulins include regular insulin – starts working within 30 minutes and is active about 5 to 8 hours.

Intermediate-acting act within 1 to 3 hours and are active 16 to 24 hours.

A meta-analysis of randomized controlled trials by the Cochrane Collaboration found "only a minor clinical benefit of treatment with long-acting insulin analogues for patients with diabetes mellitus type 2."[11] More recent randomized controlled trials have found no differences with glargine[12] and have found that although long acting insulins were less effective, they were associated with less hypoglycemia.[13]

Unlike many medicines, insulin cannot be taken orally. Like nearly all other proteins introduced into the gastrointestinal tract, it is reduced to fragments (even single amino acid components), whereupon all 'insulin activity' is lost.

Insulin is usually taken as subcutaneous injections by single-use syringes with needles, an insulin pump, or by repeated-use insulin pens with needles.

Insulin pumps are a reasonable solution for some. Advantages to the patient are better control over background or 'basal' insulin dose, bolus doses calculated to fractions of a unit, and calculators in the pump that help with dosing 'bolus' infusions. The limitations are cost, the potential for hypoglycemic and hyperglycemic episodes, catheter problems, and no "closed loop" means of controlling insulin delivery based on current blood glucose levels.

Insulin pumps may be like 'electrical injectors' attached to a semi-permanently implanted catheter or cannula. Some who cannot achieve adequate glucose control by conventional (or jet) injection are able to do so with the appropriate pump.

As with injections, if too much insulin is delivered or the patient eats less than he or she dosed for, there will be hypoglycemia. On the other hand, if too little insulin is delivered, there will be hyperglycemia. Both can be life-threatening. In addition, indwelling catheters pose the risk of infection and ulceration. These risks can be minimized by keeping infusion sites clean. Insulin pumps require care and effort to use correctly. However, some diabetics are capable to keep their glucose in reasonable control only on a pump.

In 2006 the U.S. Food and Drug Administration approved the use of Exubera, the first inhalable insulin.[14] Inhaled insulin has similar efficacy to injected insulin, both in terms of controlling glucose levels and blood half-life. Currently, inhaled insulin is short acting and is typically taken before meals; an injection of long-acting insulin at night is often still required.[15] When patients were switched from injected to inhaled insulin, no significant difference was found in HbA1c levels over three months. Accurate dosing is still a problem, but patients showed no significant weight gain or pulmonary function decline over the length of the trial, when compared to the baseline.[16] Following its commercial launch in 2005 in the UK, it has not (as of July 2006) been recommended by National Institute for Health and Clinical Excellence for routine use, except in cases where there is "proven injection phobia diagnosed by a psychiatrist or psychologist".[15]

There are several methods for transdermal delivery of insulin. Pulsatile insulin uses microjets to pulse insulin into the patient, mimicking the physiological secretions of insulin by the pancreas.[17] Jet injection (also sometimes used for vaccinations) had different insulin delivery peaks and durations as compared to needle injection. Some diabetics find control possible with jet injectors, but not with hypodermic injection.

Both electricity using iontophoresis[18] and ultrasound have been found to make the skin temporarily porous. The insulin administration aspect remains experimental, but the blood glucose test aspect of 'wrist appliances' is commercially available.

Researchers have produced a watch-like device that tests for blood glucose levels through the skin and administers corrective doses of insulin through pores in the skin.

Intranasal insulin is being investigated.[19]

The basic appeal of oral hypoglycemic agents is that most people would prefer a pill to an injection. However, insulin is a protein. Protein hormones, like meat proteins, are digested in the stomach and gut.

The potential market for an oral form of insulin is enormous and many laboratories have attempted to devise ways of moving enough intact insulin from the gut to the portal vein to have a measurable effect on blood sugar. One can find several research reports over the years describing promising approaches or limited success in animals, and limited human testing, but as of 2004, no products appear to be successful enough to bring to market.[20]

Another improvement would be a transplantation of the pancreas or beta cell to avoid periodic insulin administration. This would result in a self-regulating insulin source. Transplantation of an entire pancreas (as an individual organ) is difficult and uncommon. Generally, it is performed in conjunction with liver or kidney transplant. However, it is possible to do a transplantation of only the pancreatic beta cells. It has been highly experimental (for which read 'prone to failure') for many years, but some researchers in Alberta, Canada, have developed techniques with a high initial success rate (about 90% in one group). Nearly half of those who got an islet cell transplant are insulin-free one year after the operation; by the end of the second year that number drops to about one in seven. Beta cell transplant may become practical in the near future. Additionally, some researchers have explored the possibility of transplanting genetically engineered non-beta cells to secrete insulin.[21] Clinically testable results are far from realization. Several other non-transplant methods of automatic insulin delivery are being developed in research labs, but none is close to clinical approval.

There is conflicting evidence whether administration of exogenous insulin may increase cancer risk.[22] The increased risk may be due to increased affinity of insulin analogues to insulin-like growth factor I.[23]

In many patients, insulin is an appetite stimulant; it is sometimes used off-label specifically for that purpose. Like most diabetes treatments, other than metformin and some of the newer classes such as incretin analogues, it often causes weight gain.