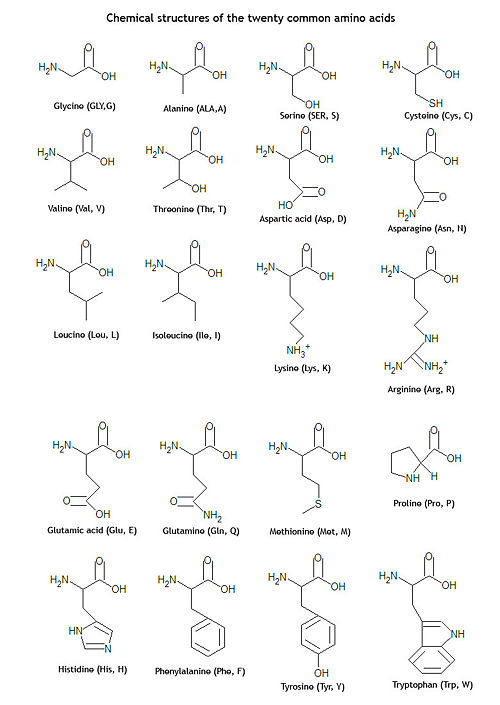 -amino acid is an organic monomer consisting of an amino group, a carboxyl group, a hydrogen atom, and a residual group (commonly denoted as simply "R") covalently bonded to a central (alpha) carbon (C

). Amino acids can link via peptide bonds to create short chains (polymers) called polypeptides, often referred to simply as peptides. Longer, more complex chains (or combinations of multiple chains) are called proteins, which have a vast array of biological functions. In peptides and proteins, the R-groups are often called "side chains", because they are not involved in the polymer backbone. Amino acids have two stereo isomers (mirror images of each other), and only the L-isomer is used in protein synthesis.

There are twenty common amino acids used by nearly all living organisms as well as several rarer ones. The difference between any two amino acids is the residual (R) group, and they can be categorized based on the chemical properties of the R-groups. Each amino acid has a three-letter abbreviation and a one-letter symbol.

For humans, the nonessential amino acids can be synthesized in cells through a variety of pathways. For some animals, the amino acid carnitine is essential, but most animals can produce it from lysine.