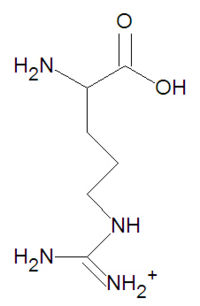 Arginine, abbreviated Arg or R, is one of the twenty common amino acids used by living organisms to build proteins. It is one of the charged, polar amino acids and it is typically found on the surface of a protein structure. It is one of only three positively charged amino acids, the other two being histidine and lysine. DNA-binding proteins tend to have more arginines and lysines to interact with the negative charges of the DNA phosphate backbone.

The R Group of Arginine consists of a chain of three carbon atoms and a guanidine group at the end of the chain.