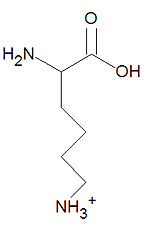 Lysine, abbreviated Lys or L, is one of the twenty common amino acids used by living organisms to build proteins. It is one of three positively-charge amino acids along with arginine and histidine. Because of the positive charge, lysine is mostly found exposed on the surface of a protein structure. DNA-binding proteins tend to have many lysines (and arginines) to enhance binding with the negatively-charged phosphate backbone of DNA molecules.