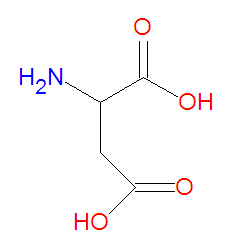 Aspartic acid, abbreviated as Asp or D, is one of the twenty common amino acids used by living organisms to build proteins. It is a charged, polar, hydrophilic amino acid, and it is thus often found on the outer surface of proteins. At physiological pH, the acidic side chain is deprotonated. It is one of the two acidic amino acids, the other being glutamic acid. It is similar to the amino acid asparagine, in which the acid group is replaced by an amide group. Canavan's disease, an inherited neurological disease primarily effecting children of eastern and central European Jewish descent (Ashkenazi), is associated with the built up of the N-acetylated form of aspartic acid.