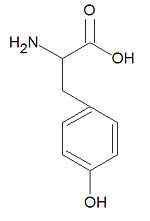 Tyrosine, abbreviated Tyr or Y, is one of the twenty common

-amino acids used by living organisms to build proteins. It is one of the four aromatic amino acids together with histidine, phenylalanine and tryptophan. It is one of three amino acids subject to phosphorylation by tyrosine kinases due to the presence of a hydroxyl group, (-OH). Such phosphorylation events are central to many cell-signalling pathways. Although tyrosine is hydrophobic and the side chain is mostly buried in proteins, it is often situated such that the hydroxy group is accessible.

Tyrosine, an essential amino acid, is synthesised in bacteria by conversion from chorismate. A mutase converts chorismate to prephenate. Subsequent oxidative decarboxylation converts prephenate to p-hdyroxyphenyl-pyruvate. A transamination reaction of the