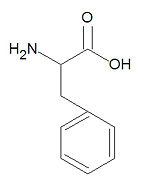 Phenylalanine, abbreviated Phe or F, is one of the twenty common

-amino acids used by living organisms to build proteins. It is one of four aromatic amino acids with histidine, tyrosine and tryptophan. It is very hydrophobic is found almost exclusively buried within hydrophobic patches in protein structures. When aspartame was first introduced (as Nutrisweet) it caused the deaths of several people suffering from phenylketonuria due to the metabolic degradation of aspartame to phenylalanine, which phenylketonurics cannot metabolize. 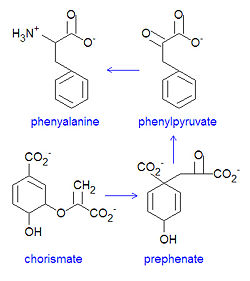 Both phenylalanine and tyrosine are essential amino acids that are biosynthesized by bacteria starting from chorismate then prephenate, at which point their syntheses diverge. Chorismate itself results from a six-step reaction starting from erythrose-4-phosphate. For the synthesis of phenylalanine, chorismate is converted to prephenate by a mutase. Prephenate is then dehydrated and decarboxylated to provide phenylpyruvate. In the synthesis of tyrosine, this step is an oxidative decarboxylation reaction that leaves the hydroxyl group on the aromatic ring. Finally, the

-keto acid is converted to phenylalanine by a transamination reaction.