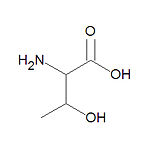 Threonine, abbreviated as Thr or T, is one of the twenty common amino acids used by living organisms to build proteins. It is one of the neutral, polar, hydrophilic amino acids. It is mostly exposed on the outer surface of proteins, but does have to be. Because it contains a hydroxyl group, OH, it is subject to phosphorylation by kinases. Serine and tyrosine are the only other amino acids with hydroxyl groups on their side chains.