I bid you welcome to my

(CC) Photo: Hayford Peirce
In my rebuilt office in Tucson in 2009
I was born in Bangor, Maine, in 1942, and attended Exeter, Stanford, and Harvard. I graduated from Harvard in 1964 as a member of the class of 1963, having majored in English. I then moved to Tahiti, where I lived for 23 years, working as a businessman in various companies that I helped found and as a minor writer of science fiction and mystery stories. In 1988 I returned to the States to live and have been in Tucson, Arizona, since 1994.

My particular interests are old-time tennis (up until about the start of the Open Era in 1968), some branches of mystery stories and science fiction, food and cooking, and an eclectic selection of baseball players and writers and personalities such as Johnny Mize, Evelyn Waugh, John O'Hara, and S.J. Perelman. I originated and wrote a number of lengthy Wikipedia articles, particularly those about Bill Tilden and Pancho Gonzales, as well as many other old-time tennis players and British mystery writers such as Michael Gilbert.

Articles that I've created in Citizendium

Pictures that I've uploaded in Citizendium 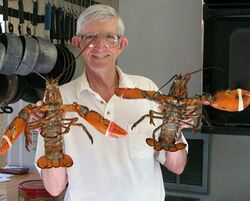 (CC) Photo: Hayford Peirce
The author, holding two lobsters that are about to be turned into a lobster soufflée.

Chap Foey Rider, the Anglo-Chinese protagonist of one of my science-fiction series, is an anagram of Hayford Peirce. The first story in the series was originally written as a joke letter to the editor of Analog magazine.

I release all my contributions to Citizendium, including those texts which I originally wrote for Wikipedia, under the Creative Commons CC-by-SA 2.5 license.

I suggest the following for this section:

Also, this is a one-cover-per-request form.

{{Speedydelete}} template can be used in the following format {{speedydelete|REASON|~~~}}

The very top line may or may not be needed, depending on where in the list you're putting this stuff -- apparently it's only needed at the very TOP of the first player to be entered. It should be REMOVED from any others, as it messes up the formatting. NO, IT'S MORE COMPLICATED THAN THAT!

Template for a recipe in a Subpage

Why can't you remember this, you stupid idiot!?

Name used for a purported state of transition metals that has never been scientifically verified and for which healing and other powers are claimed by pseudoscientific supporters.

Mystery writers to start stubs about

The Alms for Oblivion series

The 10 novels cover the period 1945 to 1973 and centre on a group of upper and upper middle class characters, forming a novel sequence, if a somewhat loosely structured one. The early novels are robust satires of the English upper set of the mid 1950s, but the later tend to a more detached and philosophical tone, becoming concerned with the occult and supernatural, and including strange happenings.

The titles in Alms for Oblivion are:

Maybe, if I stay alive long enough (and Citizendium does too) and finish all 26 of the Condon books, I can do these one after the other?