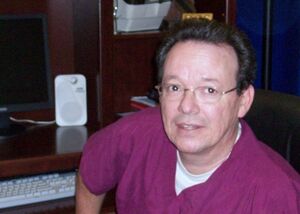 I am D. Matt Innis (call me 'Matt'). I am your Chief Constable, but before I took on that role, I was the Assistant Chief Constable during the beta stage and a constable during the pilot stage of Citizendium. I am also a practicing chiropractor in Charlotte, North Carolina, USA. I performed my pre-requisite studies through Indiana University and graduated magna cum laude from Logan College of Chiropractic in 1982. I am certified in Acupuncture from National College of Health Sciences. I opened my practice in Charlotte, NC the following year and have been active since. I served several years in my local district association and held offices of secretary and vice president. I have been active in my community, serving as president of the local business association and take pride in knowing it has grown considerably since. I helped establish and later became scoutmaster of Boy Scout Troop 198 where I learned more from the boys than they did from me. The concept of Boy-run guides me in this process as well. Those of you that have been there know exactly what I mean.