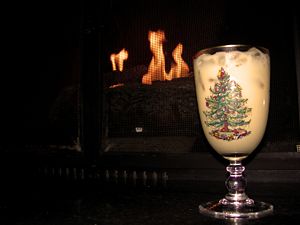 Eggnog is a special-occasion punch made from raw eggs, milk, cream and a large quantity of sugar. It is traditional to add rum to taste, although bourbon whiskey and other spirits may be used, and non-alcoholic versions are often served as well. Although its roots are in various European punches, eggnog (or egg nog) in its current form is uniquely American.

Commercial, packaged drinks called "eggnog" are available in supermarkets during the "Holidays", in the United States, the period between Thanksgiving and New Year's Day. These typically contain some desiccated egg and dairy food product, plant fillers and food coloring. To a discriminating palate they do not taste very much like proper eggnog.